Is the planet called "Earth That Was" totally uninhabited?

We know that Earth That Was became difficult to live on, so humanity spread out to terraform and colonize other worlds. Was Earth TOTALLY abandoned, or is it just a difficult environment?

There are several canon descriptions of the ultimate fate of "Earth-That-Was", none of them it must be admitted, from especially reliable sources but all suggesting an apocalyptic collapse of Earth's ecosystem: 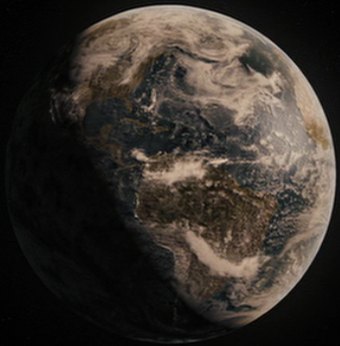 SAFFRON: That when she was born, she had no sky, and she was open, inviting and the stars would rush into her, through the skin of her, making the oceans boil with sensation, and when she could endure no more ecstasy, she puffed up her cheeks and blew out the sky, to womb her and keep them at bay, ['til she had rest some, and that we had to leave 'cause she was strong enough to suck them in once more].

The implication is clearly that the Earth's atmosphere became uninhabitable and may have been on the verge of being lost entirely.

The second canon reference is seen in the film "Serenity" and is from an even more dubious source, an Alliance teacher;

Teacher (Voiceover) : Earth-That-Was could no longer sustain our numbers, we were so many.

Teacher: (continuing) We found a new galaxy: dozens of planets and hundreds of moons. Each one terraformed - - a process taking decades - - to support human life, to be new Earths"

While she is speaking, we see the image above. The Earth appears to be in very bad shape. The atmosphere is visibly brown, the seas are almost black and the landmasses no longer seem to be capable of supporting vegetation. There is visible sea-level rise and there are columns of reddish clouds.

Although I'd bow to the judgement of an actual climate scientist (and taking into account that the Alliance teacher might simply be lying or the graphic faked), I find it hard to believe that an atmosphere with that much contamination could actually sustain human life.

The third reference is found in the episode "Heart of Gold" where we see a puppet show depicting the fate of the Earth. The official translation (found in the Firefly Companion) is very telling.

Narrator (in Chinese, translated below): Little by little, the tribes used the earth up. Barren, she had little left to offer them.

Silhouetted shapes appear. Spaceships. They radiate out from the Shadow Sphere, scatter in all directions. Leave it behind.

Narrator:
Swollen of her, they left. And for the first time since the Great Burn that birthed her, She was alone.

The Ships are gone now. A wisp of Smoke wafts off the Sphere, creates a snake of Shadow.

Narrator:
The Earth cried, and terrible were her tears. Acid and caustic, the spawn of the Tribe's rape.
They flowed a Century.

Narrator: The fire that finally came did so as a Blessing.

The sphere smolders now, bits of it breaking up and disintegrating under the intense heat.

I also found this webchat comment from Joss Whedon. Note that while he doesn't totally confirm the questioner's assumption that Earth-that-was has been destroyed, neither does he deny it.

philUK: Joss, in Serenity universe before earth got destroyed, what happened to the UK? Did we finally become the fifty-first state?

Joss: Yes. In fact, America annexed England and the planet that represents America in Serenity and Firefly is called Londinium, proving once and for all that we killed daddy because we wanted to be him.

I don't recall this being settled on-screen one way or the other.

On the one hand, it would be odd if Earth was completely abandoned because of environmental degradation. It is humanity's original home, after all. Even if people needed artificial environments to survive, you would expect a few people to hold on there. And if they can terraform other worlds, surely they could use the same technology to fix Earth's environment, even if it took a long time.

Then again, there is absolutely no mention of ongoing contact with Earth. If anyone was still there, you would expect them to be able to send radio signals back and forth. And they always refer to "Earth-That-Was", not "Earth-That-Is-Far-Away".

It could be that the school lesson we see at the beginning of the film Serenity was just sanitised Alliance propaganda, and the real reason for leaving Earth was more alarming. Perhaps the planet was made uninhabitable by out-of-control nanotechnology, a robot uprising, or the like. Or maybe the settlers in the Firefly universe were deliberately exiled as criminals, religious or political dissidents.

We can speculate but I don't think we really know.

Don't forget about episode 13 "Heart of Gold"! When Malcolm and Inara are in the "theater" with Rantz Burgess, in the background is a man narrating a screen depicting what appears to be the story of "Earth-that-was". It shows the ships leaving in a blue sky background; and then slightly later, there appears to be material flapping while the sky turns red implying a fire or explosion of some kind.

The only other relevant information I could recall from the show not already posted here pertains to the Lassiter, one of the first laser pistols built on Earth-That-Was. Saffron and Serenity's crew set out to steal it in the episode "Trash" (more info about the Lassiter and this episode here), and its previous owner is a renowned collector of ETW artifacts. There's some implication in this episode that artifacts like the Lassiter were passed down through generations and not recently recovered from ETW. However, this is just more speculation. To my memory, the crew encountered no empirical evidence of the fate of ETW.

What little knowledge of Earth That Was seems to be summed up here.

The important part being:

Creation myth
As told by Saffron to Wash:
"When she was born she had no sky. She was open, inviting, and the stars would rush into her, through the skin of her, making the oceans boil with sensation. When she could endure no more ecstasy, she puffed up her cheeks and blew out the sky."

Refugees from a crisis will always talk about the old country, and even if a place still exists with the same name, it's no longer 'that place.' I know folks from the Republic of Vietnam, Republic of Iran, etc. When they lament about their lost homes, it's clear there's no going home. They speak of home in a past tense, never the present. The fact earth is described in time "earth-that-was" suggests there is also an "earth-that-is" which is no longer accessible. This could be climate remains hostile, or it could be political, but more likely the no-return policy is mostly distance.

Also, whether or not the Earth stopped supporting life altogether, the chances that 100% of the population left is zero (since the resources required to move billions of humans across the galaxy exceed the mass of the planet.) If Earth stops supporting life, 99% plus of the population dies... we live on a planet with a deep gravity well: we aren't ALL going to get of this rock. Even with the ship tech they have, it's field propulsion that requires relatively scarce commodity because Mal's always worried about getting more. Smaller planets are easier to get to and get off of. If the Earth had a massive die off... then even if it's still accessible, it becomes a graveyard. The whole "Miranda" planet-cide touches that a "we killed earth" theme was originally intended to be the finale, but the producers decided that plot was too grim.

The reality doesn't include FTL, so moving a population to another solar system would involve 1 way DNA ships and robot parents for the first generation. This lack of FTL would also eliminate 2 way travel and only very very limited 2 way communication on a generations long lagtime.

So.. effectively, "earth-that-was" is a lament for the past, but the barrier to returning isn't a broken earth, but simply the distance.

It's also worth pointing out that if the entire population came from DNA seed ships, "Earth-that-was" almost certainly didn't do this in one direction only. The Firefly universe almost certainly has sister systems that are unknown/unspoken that are also outside of the reach of easy commutes.

On the episode "Heart of gold" you see ships leaving, followed by a transitioning from a yellow backdrop to an engulfing red backdrop with smoke/flames coming off the earth. Similar to what will happen when our star turns into a red giant - it will expand and swallow the earth.

It seems pretty symbolic of our star turning into a red giant [not due for a few million millennia]; maybe we did something to our sun, maybe its just a tale told to stop people from returning.

2
What is the status of Earth in Firefly?

35
Are the planets in Firefly in just one star system or spread across the galaxy?
77
How does gravity work on Serenity?
10
What is Wash referring to?
33
Why does Mal abandon the Tams in “Safe”?
19
How did the hill folk in Safe know Simon's profession?
12
Why didn't the costume designer know the purpose of Zoe's necklace?
15
Was Jayne from Canton?
21
What is Inara's backstory?
9
Why does Mal hide his identity for one Alliance encounter, but not another?
22
How did Jayne know when to shoot?