I'm struggling to find and I'm pretty sure I didn't imagine this: From one of the Stargate's (Movie, SG1, SGA or SGU) - I remember the home symbol being two Anubis? guards leaning into the sun.

However I cant find an image anywhere.

In which movie/series did this show?

It's from the original movie. Daniel was the one who realized that the two squiggles were stick figures and drew them with a sharpie.

It was a pyramid with the sun on top.

From the movie script:

[He looks around, spotting a marker in Mitch's pocket and grabbing it.]

DANIEL
Two figures on either side, praying beside a pyramid with the sun directly above it. 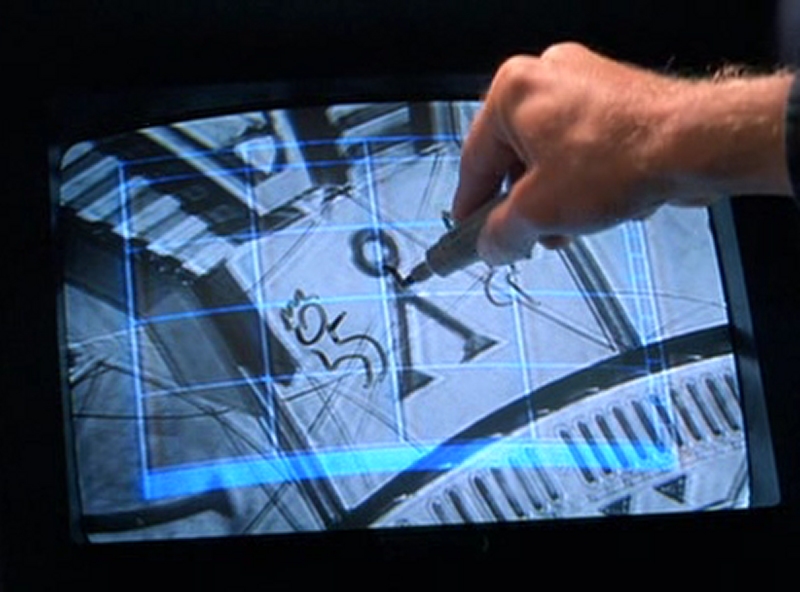 And now... for the REAL fun part!!! The actual prop coverstone in the movie did not have the kneeling figures!!! (it was a production mistake)

Not the answer you're looking for? Browse other questions tagged stargate stargate-sg1 stargate-atlantis stargate-universe stargate-movie or ask your own question.

29
Stargate - Earth's “point of origin” Symbol
9
Changes in the Constellations shape over time Vs Stargate Glyphs
7
Is it impossible for Earth Stargate be modded to dial all Stargates?
10
Has there ever been any episode that didn't show a stargate in use?
6
Are the Stargate glyphs different between Pegasus and Milky Way galaxies and how does it affect the DHD on puddle jumpers?
11
What are the different terms used to describe a Stargate?
6
Why is the symbol on the Beta Stargate wrong?
38
Why did the writers never let the Stargate be revealed to the public?