If Anakin Skywalker didn't get what he wanted as a Sith (to save Padmé), why was he still a Sith?

In the prequels, the primary reason Anakin was willing to become the Chancellor's apprentice is because he wanted to save Padmé;

ANAKIN: I will do whatever you ask.

ANAKIN: Just help me save Padme's life. I can't live without her. If she dies, I don't know what I will do.

PALPATINE: To cheat death is a power only one has achieved, but if we work together, I know we can discover the secret.

ANAKIN: I pledge myself to your teachings. To the ways of the Sith.

Given that he didn't manage to save her, why did he still become a Sith?

In Jedi vs Sith: The Essential Guide to the Force, it notes that

The dark side was extremely addictive, and almost impossible to renounce. Every time a person in tune with the Force called on the dark side, they became more and more addicted to the power it brought them.

In addition, many times when a being 'fell' from the light side to the dark side, it was following great tragedies or issues they felt were unsolvable. Additionally, the dark side, especially the tenets of The Rule of Two, was based upon mistrust. And once a being fell into mistrust of the light, it was difficult to regain that trust, especially from an adversarial position.

Also in the book Jedi vs Sith, a theory is presented, created by Tolaris Shim, called the Four Stages of the Dark Side. They are,

To pass through and come back to the light required a heroic action without use of the dark side, something a Sith heavily invested in the dark side would find extremely difficult. But most key to your question is what Shim thought about step 3: Submission. Shim believed that once a Jedi accepts the dark path, having to justify the end by the means is of no more concern. Thus, Anakin, once he had turned, had power - incredible power, very different than comparable power of a light side user, and of course did not want to give it up. And by this point, he had no need to justify his actions to himself.

The point is, he was already a Sith by the time Padme died, and so had no desire to change back. And the rage he felt at her death drove him further into the Dark Side's hold. (Additionally, remember that Sidious told Vader initially that he (Vader) killed Padme).

Vader provides an important reason for joining the Sith in Episode III -- he thinks the Jedi have lied to him and are evil:

Anakin Skywalker: Don't lecture me, Obi-Wan! I see through the lies of the Jedi. I do not fear the dark side as you do.

Anakin Skywalker: I should have known the Jedi were plotting to take over.

Anakin Skywalker: From my point of view, the Jedi are evil.

Since Vader believes the Jedi are evil, and the Sith oppose them, from his point of view it makes sense to ally with the Sith. By this point he hasn't found out that he can't save Padme, but Padme's death wouldn't change his hatred of the Jedi.

Vader's dialog with Luke in Episode VI provides more reasons why he remained a Sith. By this time he has long since known of Padme's death, and he has had plenty of time to reconsider becoming a Sith. Yet he still has reasons for remaining a Sith:

In short: Vader (no longer Anakin, in his mind) hated the Jedi, believed that the dark side was stronger, was afraid of the Emperor, and felt he was beyond redemption. With these reasons, it made sense for him to join the Sith even if Padme had died.

Even before he knew Padme was dead he had already become inundated by the dark side. He had, already, killed so many people at the jedi temple but more revealing was his conversation with Obi-wan before their bout. There, he tried to impress upon Obi-wan the jedi's impotence and how he would bring piece to the galaxy and to his 'new empire'. This represents 4 very influential ideas that each, by themselves could, understandably, change a person.

All but the 1st point were motivated by his desire to do what was right (in his own misguided way).

Anakin was an idealist. In his discussions with Padme throughout the movie, it's clear they both want an end to the war, and to galactic violence. In his arguments with Padme near the end this is still a very strong motive, though he is of the opinion by this time that a good dictator might be able to achieve the same end much more quickly while she believes democracy is the best way to go.

He knows that Padme desired peace as well.

With his friends dead or effectively banished, his wife and children gone, the only thing he has left to pursue is this ideal that he and and Padme both desired. He may not be interested in pursuing it the way she would have liked, but it was still a desire in himself, possibly buoyed in part by the knowledge that she, too, desired peace and stability.

Further, he was still the apprentice of Palpatine and Palpatine saved him from Obi-Wan's seeming betrayal. The only person in the universe now who could seemingly understand and mentor him was Palpatine, and Anakin was still a teenager at this point. He's hardly able to make reasonable choices in the absence of good counsel. Also, his life, at this point, was in the hands of the empire. The technology to keep him alive wasn't something he could simply cart with him to a rim planet and live out his remaining days at this point in time. Perhaps as he grew in power and in later movies he would have been capable of breaking away, but at this juncture it would have been a death sentence.

In fact, the emperor knew that only Padme herself or Anakin's children would ever be capable of saving Anakin - which is why, once he learned of Luke, he worked so hard - moving heaven and earth, so to speak - to convert Luke. 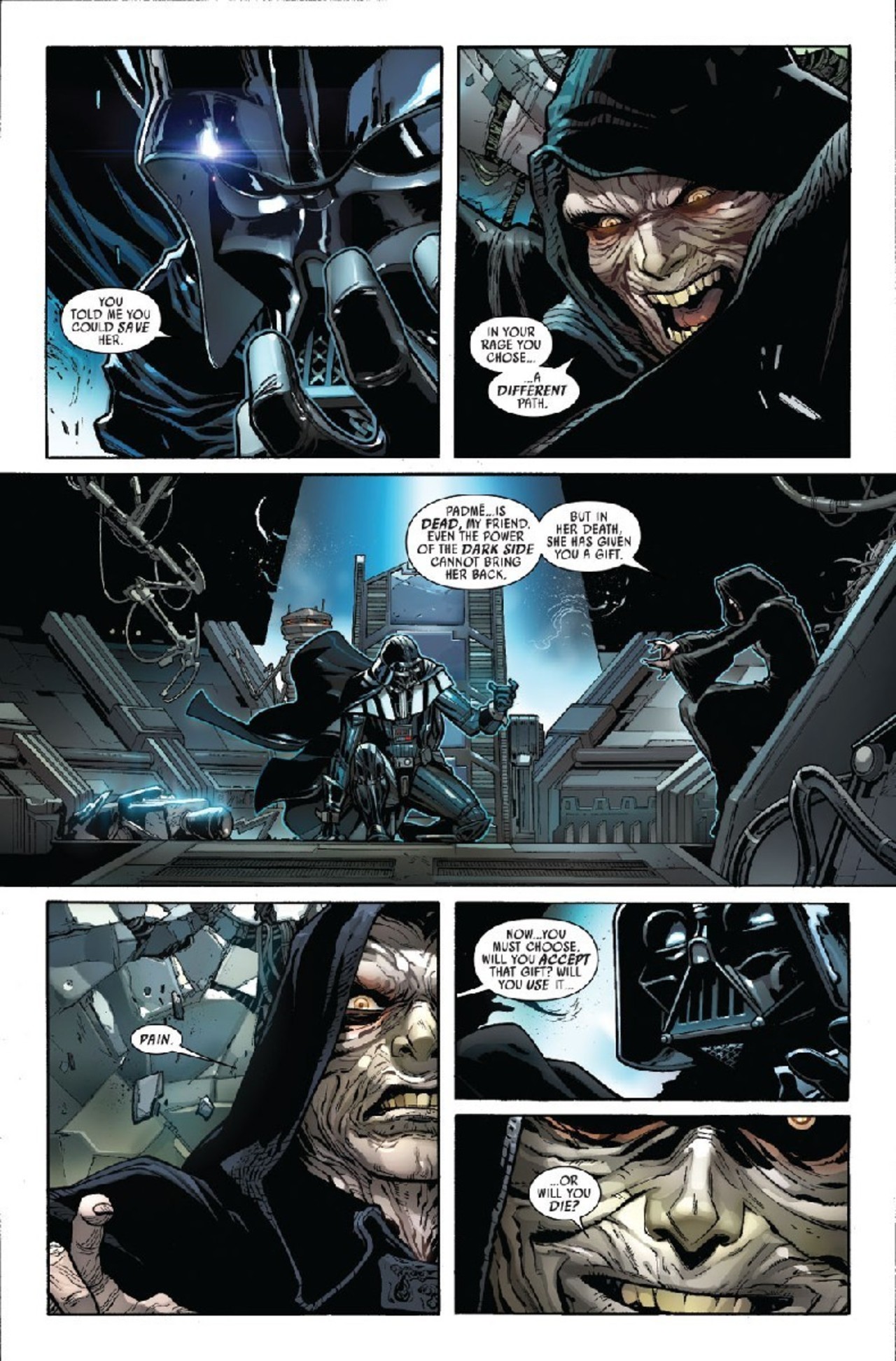 The first issue of the new Darth Vader comic series begins directly after the scene where Vader is first encased in his life support suit, when he finds out Padme died and destroys the operating theatre and the medical droids who just saved his life. He turns to the Palpatine and tries to force choke him, but discovers he isn't as powerful as he used to be, and in his inner monologue he realizes that the only person left who ever cared about him is Palpatine. Palpatine then responds to Vader's attempted murder by attacking him with force lightning and promising that if he ever tries to use the force against him again, he will kill him.

I feel this pretty much explains Vader's motivations from then on and why stayed loyal to him, up until Luke entered the picture and he realized he'd been lied to and manipulated into losing everything he cared about, but he's still caught up in the dark side, he can't imagine life without it, he even attempts to cause his own son to fall by capturing his friends, cutting off his hand and threatening to kill everyone he cares about too if he doesn't turn. In my mind seeing Luke faced with a very similar situation yet refusing to fall to the darkness changed Vader, which is what eventually lead to his redemption to the light in the throne room of the second Death Star at the Battle of Endor.

Adding on to the answers already posted here, it is impractical for Anakin to try and run anyway.

By the time he found out that his vision had indeed come true, he is already a big black walking armoured cyborg. I was studying lightsaber styles and midichlorians and it was mentioned that his new prosthetics are getting in the way a lot. After becoming Darth Vader, he is no longer as powerful as he used to be as Anakin Skywalker, both lightsaber and Force-wise. That's the reason why none of his plans ever involved a one-on-one confrontation with Palpatine, isn't it?

It's also the reason why he will fail if he try to run. Palpatine can easily cut him down. Especially frying his life support systems. Even if he does the smart thing and waits until he is sent on a mission far away from Palpatine before he runs, the Emperor can simply label him a traitor and an enemy of the Empire. Vader did check for and believe an executive order exists to have himself killed, so we can safely say that if it comes to it, the Empire would be ordered to hunt him down. Unlike the dozens of surviving Jedi, the big black armoured machine is much less conspicuous to hide anywhere. He'll have to go find his own uncharted planet to hide in.

The fact that Vader had once checked if an executive order exists for his own termination shows that he had considered his own self-preservation against Palpatine too. It's just that running away from Palpatine in his current state appears to be much more difficult than saving Padme in practice.