Does using the Stargate make you younger?

As we have seen from the show Stargate SG1, traveling through the Stargate is not instantaneous. It takes a few seconds for a persons (or any items) energy signature to travel from one Stargate to another, yet the person traveling through has the experience of arriving instantly with no time delay.

So does each trip you take through the Stargate technically make you younger (then someone born on earth at the exact same time as you that has never travelled through a Stargate)?

Could it be used as some sort of stasis device?

In principle you could certainly use the gate as a storage or stasis device, converting people into matter and then reintegrating them at a later date.

I don't see any reason why that should result in them becoming 'younger'.

The stargate basically works by converting matter into its constituent atoms, sending them via a wormhole to another location and then re-converting them into conventional matter.

In the episode "48 Hours" we see Tealc trapped inside the gate itself until they can create a fake wormhole horizon and basically trick the gate into reintegrating him.

Carter explains the principle quite nicely;

CARTER : You know how the Stargate turns matter into energy and then transmits it through a subspace wormhole?

CARTER : And the gate on the receiving end is what translates the energy signature and reconverts it back into its original form.

CARTER : The Stargate has massive amounts of memory inside it. It's like a computer buffer. It temporarily restores the energy patterns before it reconverts them into matter. Now it does this to make sure it has all the information before it reassembles the object - or in our case, person.The error we're receiving from the gate seems to indicate there's still an energy pattern stored in the memory buffer.

CARTER : If the Alkesh crashed into the DHD on the other planet it would have cut off power to the outgoing gate. Then the wormhole would have been severed prematurely. Now if that happened before our gate was able to reconvert Teal'c's energy signature back into matter...

HAMMOND : Teal'c is in our Stargate?

CARTER : His energy signature, yes. Stored in the memory.

Rodney and the SG: Atlantis team use the same principle in the episode "38 Minutes" where they do this to Sheppard intentionally. He's heavily wounded and it means that from his perspective, he'll get medical attention immediately 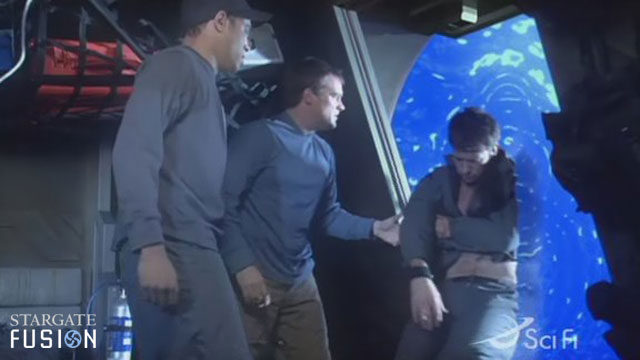 Travellers don't seem to experience any relativity effects while moving inside the wormhole itself (which is actually pretty consistent with the Einstein/Rosen concept of a "bridge" or "gate" between fixed locations in space and time) so the essence is that you don't get younger by travelling in a wormhole, you simply pop in one place and pop out the other. You might appear not to have aged but they don't make time go backwards.

The answer isn't necessarily a binary one. Relativistically speaking, if we were tracking the seconds two people had physically existed (let's say a pair of twins) and then one person started using the gate to travel great distances, the time they would "lose" in transit, could begin to add up.

Not the answer you're looking for? Browse other questions tagged stargate stargate-sg1 stargate-universe or ask your own question.

47
Is the Stargate storyline continued after Stargate: Universe?
19
The Durability of a Stargate (SGU spoiler?)
6
Is the Stargate now at Homeworld Command?
20
How does the stargate ramp survive the unstable wormhole?
1
In Stargate Universe, why not just dial the Destiny using 8 chevron method?
6
If the Goa'uld exile you on an unknown planet with a Stargate, can you escape?
12
Why is exiting the Stargate inconsistent?
6
Are the Stargate glyphs different between Pegasus and Milky Way galaxies and how does it affect the DHD on puddle jumpers?
5
Which Stargate address is shown on the Stargate plans?