Where did the term “energy signature” originate?

Lots of sci-fi franchises (Stargate, Eureka, Transformers to name a few) love to throw around the term "energy signature" when they want to indicate that something can be magically identified, measured, located, tracked, or otherwise observed without resorting to technical details. From what I can tell "energy signature" doesn't seem to mean anything in any scientific field but it's near-ubiquitous in fiction. Where did it come from?

Some Googling doesn't reveal any meta-discussion about the term except for a lone blogger comparing it to Applied Phlebotinum (TV Tropes warning). It doesn't seem to be a well-defined trope itself. Outside of sci-fi, most mentions come from the new age pseudoscience realm.

So what's the story? Was it derived from any legitimate science? Is it a running gag among sci fi writers? A backhanded reference to the new age stuff? Do we have an Ur example? (TV Tropes again)

Izkata's guess was right. Star Trek: TNG usage of the term predates any printed SciFi works. The earliest episode I could find was:

DATA:
The energy signature would seem to indicate a phaser-like blast... 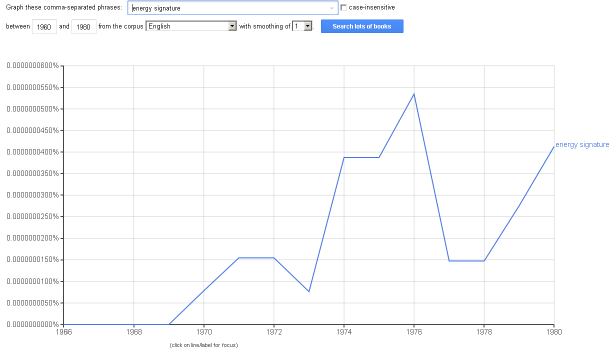 This is actually a scientific concept. It would be possible to identify the source of power for (some) ships because an antimatter reaction would produce radiation at very specific energy levels. For electron-positron annihilation this is gamma at 511kev (kilo-electron volts). More plausible for a ship would be something based on proton-antiproton annihilation, but I can't remember what value that's supposed to be.

Fission reactors would also certainly be emitting something specific depending on their reactor design and fuel cycle, and I would think most fusion fuel cycles would also be detectable (not all, since p-boron emits primarily beta radiation and a few others are like that as well).

The funny thing is you should be able to detect these technologies even if you don't yet have the science and engineering yourself to make them. If a ship showed up in orbit around Earth today and it was using one of these power technologies, we'd be able to determine just which it was.

[edit] DavidZ corrected me on the value for electron-positron annihilation.

I suspect this was (at least in part) derived from acoustic signatures which are used in both military and civilian applications to identify unknown objects. Tom Clancy's "Red October" -- the book, not the movie -- is an excellent semi-fictional/semi-factual read which wonderfully describes submarine sonar operators using advanced acoustic signature analysis to track enemy ships.

While doing research for this answer I just stumbled upon this nineteenth-century journal describing the chemical sulfur as having an "optical and acoustic signature". This reminded me that we have been using optical signatures via spectroscopy for about 200 years and today we can identify the chemical composition of stars millions of light years away by their spectral lines.

IMHO, these were early forms of the still advancing science of energy signatures, for after all what are light and sound but forms of energy?

Not the answer you're looking for? Browse other questions tagged terminology energy or ask your own question.

2
How do I address someone with a term that is the opposite of Jedi?
18
The origin and use of the term TARDIS
8
Did the term “congresscritter” originate in SF, and, if so, who first used it?
19
Is the term “muggle” pejorative?
97
Is there a term for the science fiction trope where a character lists two historical things and a future thing?
6
Where did the term “the living impaired” originate?
19
What’s the first use of the term “Downwell”