Why does Deadpool always have a yellow speech bubble?

When Deadpool was created and introduced by Rob Liefeld, he was a quirky assassin, but spoke with normal speech bubbles (colors matching everyone else in the scene).

Every time I've seen him in anything recent, his speech (inner monologue and external dialogue with other characters) is always in a yellow speech bubble distinctively different from everyone else in the scene.

Why are his speech bubbles colored differently? 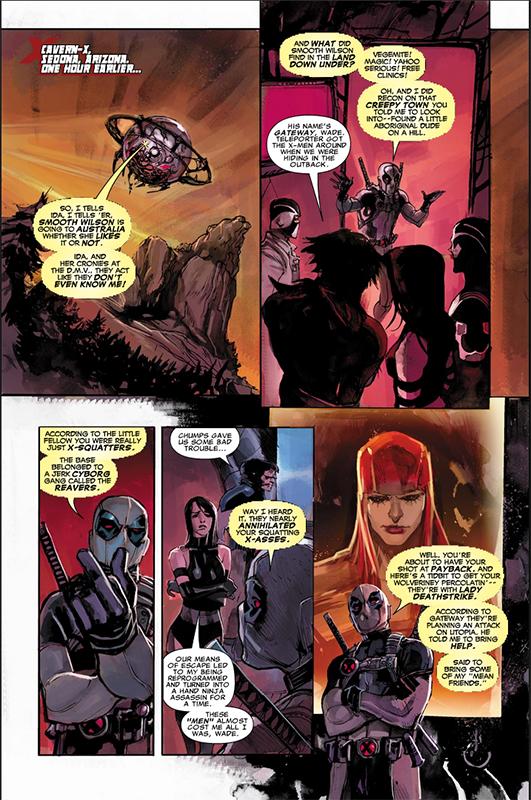 In comics, unusual speech bubble shapes or colors indicate that there is something different about the way the character talks. This convention goes back to the earliest Action Comics (if not earlier) where 'translated from language name' words were italicized, giving them a very different appearance.

It's used to indicate that Deadpool's method of speech is instantly recognizable to anyone who hears it. I've also seen it indicated that his 'little yellow boxes' are also speech bubbles - he simply thinks it's an internal monologue.

The different colored boxes that appear in the comic books were introduced to show Deadpool's increasing descent into insanity. So far, he has dealt with two voices: the 'Yellow Box' referenced in the question is a child-like, smart-assed, highly excitable voice that rarely thinks before voicing its opinions. The second voice, the 'White Box', although sarcastic in his own way, he tends to use more logic and carefully thinks things through. It should be noted that he also tends to want a degree of distance from Deadpool and the 'Yellow Box', as referenced in the High Moon Studios video game Deadpool, where he states 'Y'know, time apart could really help this relationship. Just saying'."

If by recent, you mean anything in the last two decades. Deadpool's yellow speech bubbles started in his first solo title. The prior limited mini series like The Circle Chase and sins of the past had white bubbles with a yellow border. I can't recall if any of his appearances prior to Deadpool Vol. 1 Issue 1 had the yellow bubbles, in X-Force at the time.

Unique speech bubbles or thought boxes are shorthand for the audience to tell certain aspects of the characters both in and out of universe. In Deadpool's case, it's that he's very weird in universe. Other characters also have unique bubbles. Cable is often blue. Superman had yellow while batman has blue, green lantern green in some of the pre Flashpoint Justice League comics.

As of Vol. 3 written by Daniel Way, some bastard white boxes have shown up, supposedly both Deadpool second internal voice or the Arthur, Way, interacting with him. They suck.

Actually, your answers are wrong. The different colored boxes are "voices" in his head. This is all explained in "Deadpool Kills the Marvel Universe."

It's true that it's to show a unique voice, but whenever someone's dressed as Deadpool, they have yellow text, and I imagine their voice might be different.

I'm fairly certain that the voices are actually two different protagonists in the marvel universe, conversing to both one another and Wade, driving him to his decent to madness. While I do know some comics supported this, I can't remember which. So, I may as well be as credible as a goose, but It's my two cents. It is just another possibility, however, given that your other theories are just as likely.

Not the answer you're looking for? Browse other questions tagged marvel comics deadpool or ask your own question.