How was Jonas Quinn able to learn so fast?

Did Stargate SG-1 ever explain why the Kelownans like Jonas were able to learn so fast?

Did it have something to do with the experiments that were conducted by the Goa'uld?

It's fairly clear that Jonas' mental capacity ranks him amongst the most intellectually capable Kelownans. In addition to possessing multiple degrees from Kelowna's most prestigious university (and being tasked to work on their most important scientific project) he also seems to have an eidetic memory, as he mentions to Sam Carter in the episode SG1: Redemption Part 1

JONAS : You know, Major…I'm as physically fit as anybody on this base and I've committed to memory almost all of Doctor Jackson's work…

JONAS : According to the tests Doctor Fraiser administered, I have the ability to learn much quicker than the average human.

In the episode SG1: Metamorphosis, the Goa'uld Nirrti places him in a genetic manipulation device created by the Ancients and reveals that he is considerably more evolved than the average human. I've edited the transcript for brevity;

NIRRTI : You are not human.

JONAS : Oh, I'm human. I'm just not from Earth. A Goa'uld like yourself took my ancestors from Earth thousands of years ago and enslaved them.

NIRRTI : Those few thousand years on another world have changed you more than you know.

[Jonas awakens on a mattress surrounded by pillows. Nirrti lounges on a chaise nearby.] JONAS : Why did you…bring me here?

NIRRTI : Because you are different.

NIRRTI : You are much closer than the others. With my help you could complete the transformation [to become a Hok'taur]

NIRRTI : No, I assure you. You must know that you are capable of much more than the petty tasks that life among the Tau'ri can offer. 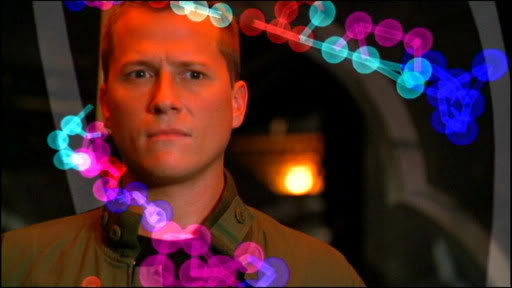 It's never revealed whether his abilities are as a result of experimentation on his people by their former goa'uld master, exposure to Naqadria or simply part of the normal evolutionary process, but it's clear from the above, and from the fact that he was ultimately inducted into his planet's ruling council that he's an exceptional individual amongst the Langarans.

Jonas is established to have evolved to a cognitive level greater than that of the Tau'ri in Metamorphosis. It is never revealed whether this is common among Kelownans/ Langarans, though it seems a reasonable assumption.

I don't think there was anything special about the Kelownans generally. Jonas was just a genius.

4
Is Jonas Quinn typical of his species?

29
Stargate - Earth's “point of origin” Symbol
13
What happens to a Jaffa's Goa'uld once it matures?
19
How did the Goa'uld develop interplanetary travel?
18
Why does no one ever come through Earth's Stargate?
11
In Stargate SG1, why don't the teams ever bring back dead Jaffas for study?
8
Did anyone ever question the Asgard's resemblence to the legendary Greys?
3
Why would Goa'uld blood be both toxic and be able to neutralize itself?
20
Was the Harcesis in SG-1 inspired by actual ancient mythology?