Is Death supposed to have a scythe?

In Season of Mists - Prologue (Sandman #21), when Destiny invites all the Endless for a family meeting, Death appears in her usual Goth Chick Avatar. She is then asked by Destiny to be more appropriately attired, to which she replies:

Aw, C'mon. You know how much I hate wearing that stuff...

...Next thing you're going to be moaning that I ought to get a Scythe...

Also, in Death - At Death's Door (by Jill Thompson), when mocked by a "Dead" that she does not look like death but like "my other goth chicks who choked on their own vomit".

To which Death replied in this way: 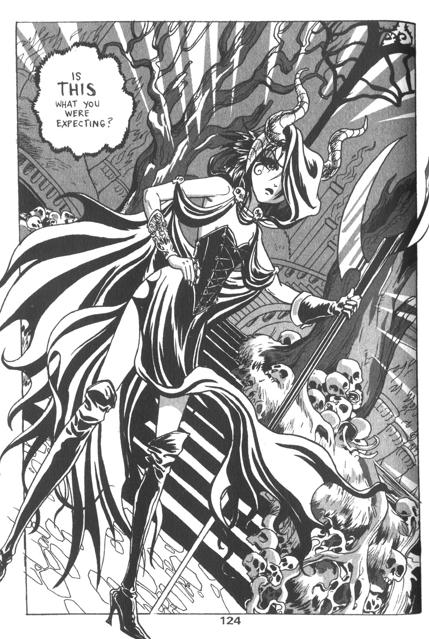 You can see in the image that she is carrying something scythe-like.

Does it mean that Death of the Endless is supposed to carry a Scythe, or was just some sort of joke on Death's part.

"Does it mean that Death of the Endless is supposed to carry a Scythe, or was just some sort of joke on Death's part."

What about dying single-celled life-forms that would not even be able to recognize a scythe?

I know you want canon answers only, but if you've read Sandman you know she's not merely the Dante version or the Egyptian version or the Greek version. She wears whatever fa√ßade helps put you at rest at the moment of your death. Forget the scythe, her most death-defining feature is the sound of wings as you are spirited away.

She would not say "Is THIS what you were expecting?" if that was her everyday appearance. She tries to present herself according to expectations to minimize the trauma.

The best way to think of / understand this is: The Endless (Death, Dream, Desire, Delight/Delirium, Destruction, Despair, Destiny) existed before humans. Before human shape, and much before human tools like a scythe. They look like they need to look for us to understand them. Mostly though, we only meet her. Once. And her everyday look is usually very casual with an ankh necklace (it's seemingly incongruous at first thought, but makes perfect sense once you settle into the narrative and understand that the human forms they inhabit are only temporary). They were here before us. They'll be here after us.

7
What is the origin of the concept of "reaping" souls?

6
Could Loki have been responsible for the first Despair's death?
8
How is Nekron related to Death of the Endless?
12
How did Roderick Burgess capture Dream instead of Death?
8
How will Death of the Endless die?
7
What is the relationship between Death of the Endless and Daniel Hall like?
3
Did Neil Gaiman base Dream's eyes' appearance on Terry Pratchett's Death?
6
Who is Death talking to at the end of "Death: The High Cost of Living"?
5
What is the chemistry behind Element Girl's death?
7
Did the duke's daughter dreaming of goblets of sour blood have any influence on Vassily's decision?