What order should I read the Patternist/Patternmaster series in?

I usually tend to read things in publication order, because I trust that there are no references I'll miss if I do it that way, since the original readers couldn't very well have expected to read them out of order, but in this case the omnibus edition orders them chronologically (and also skips Survivor, which Butler has disowned). The only reason I would want to read them in in-universe chronological order is if there are significant spoilers inherent in the nature of the books: e.g. if some character is put in mortal danger in Clay's Ark, but they are a main character in Patternmaster then I'd know that any danger to that character is not "real".

So given these concerns, can someone who has read these books suggest an order? I've already read Wild Seed (picked it up years ago at a used book store and didn't know it was part of a series), so in a sense I already have a feel for the universe.

Edit: I've now read all these books, and I'll say that I agree with the accepted answer pretty strongly. There definitely are spoilers if you read it in publication, rather than chronological order. That said, most of the books are largely independent, and I ended up going Wild Seed, Patternmaster, Mind of My Mind, Clay's Ark, Survivor and I didn't feel like it really damaged my enjoyment of the books. I'd still recommend the chronological order.

Olivia Butler re-released her "Patternist" books in a single edition entitled "Seed to Harvest" which contains the novels "Wild Seed", "Mind of my Mind", "Clay's Ark" and "Patternmaster" but notably ignored the 1978 novel "Survivor" which she apparently disliked so much that she asked her publisher not to renew printing. 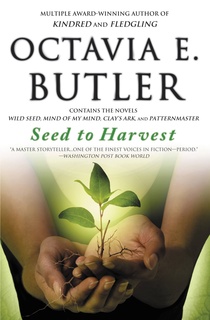 As she was in charge of the book order, it's clear that she felt that a strict in-universe chronology was preferable to publishing order.

That said, (and although I've not read them personally) the reviewers on 50Books seem to be very much of a mind that reading them in publication order would be their recommendation due to the improving quality of the later books. There's no mention of spoilers if books are read in the 'incorrect' order.

This is inevitably a matter of opinion, but the first book I read was Mind of My Mind when it was released in the 70s (I think I was about 16) and I really, really loved it. I then read Wild Seed, and I loved this too because it provided a back story for the events in Mind of My Mind. I only read Clay's Ark and Patternmaster fairly recently, and I thought neither were as good as the first two books I read (or maybe I just grew up in between :-).

I think this is a good order for reading the books. I know Patternmaster was the first book, but to me the books feel as if Mind of My Mind was the first and best, and the other books were an exercise in filling in the gaps.

I think in the case of these books, you can probably read them in any order and not have a problem with spoiling or the like. I read Patternmaster first and I just finished reading Mind of my Minds. My only issue is the fact that I forgot most of Patternmaster except for the fact that the non-telepaths were slaves (and pretty disposable), but that was enough to enjoy Mind of My Mind and the way it depicted the creation of the Pattern. It felt a lot like the Planet of the Apes series in that you know what is coming mostly when you read the books that take place before the other ones but you don't know the characters and that makes all the difference.

Or it's like Love & Rockets where everything was written out of order anyhow and much of the work is about enriching what you already know.

Not the answer you're looking for? Browse other questions tagged suggested-order patternist or ask your own question.

173
What order should Asimov's Foundation series be read in?
39
Reading Order for Heinlein's "World as Myth" Books
15
Can I skip these books in the Magician/Riftwar series?
7
Wild Cards spoilers, backstory, and reading order
27
Game of Thrones: Alternate reading order for Books 4 and 5?
5
James Blish, Cities in Flight series
3
In what order should I read the Warcraft books?