Telepathy vs. Telekinesis in Marvel Universe

I've been wondering why Professor X, generally considered to be one of the most powerful mutants, was susceptible to physical attacks to his head and body by people using helmets to block his telepathic mind-reading abilities (Magneto and Juggernaut for example).

My point is that telekinesis, the power to move objects with thoughts (used by characters such as Jean Grey, Emma Frost, and Psylocke to name a few) is also an ability that stems out of the mind, so are they just extensions of the same ability in the X-Men Universe and if so, why doesn't Xavier ever expand into that area? 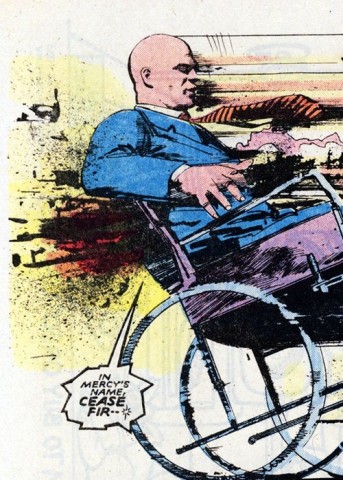 No, they aren't manifestations of the same ability. Most super-powers are controlled mentally, and of course each superhero's non-super abilities are also all controlled via their minds as well.

One reason it seems as if telepathy and telekinesis go hand-in-hand is because of the Jean Grey family heritage, with the original X-man and her four genetic descendants (Rachel Grey, Nate Grey, Cable and Stryfe) all displaying similar power.

Of note, perhaps, is that Jean initially only displayed telekinetic powers; her telepathy developed when the X-Men believed Xavier had died (circa X-Men 42), possibly catalyzed by Xavier. When the O5 team came forward in time, Jean again had her telepathy activated.

In regard to telekinesis (also called psychokinesis) and telepathy:

On the subject of Charles Xavier

Eric Stealth (aka Vegeance, Arch Sabre, Cosmic Phoenix) is a superhero in all Comic Universes that no one mentions or heard of. His telekinetic powers manifested at age 3 when his then nanny saw him manipulating the fire lit by a match light up a candle. At age 5, he accidentally turned boiling water in vapour that was to be used on his mother's tea. Due to his innate abilities at such a young age manipulating fire and water and being a danger to his older siblings, he was sent to an orphanage (much like Cyclops). At age 6 he developed a mistrust of people and caretakers around him that inadvertently activated his telepathic abilities creating fantasy worlds (or alternate universes) that portrays a loving family and acceptance of friends.

Charles Xavier was accidentally telepathically called upon when Eric was creating one of his alternate universes. Charles having experienced such power from a boy at age 6 tried to reach out to him but was blocked out from entering Eric's mind completely due to Eric's inability to relate and trust people after he was sent to the orphanage.

Like most mutants he became an outcast never relating to his peers in grammar and an high school. His teachers were often full of admiration in that he excelled in the arts and later on in technology. After graduating from high school his telepathic and telekinetic powers became very useful after accepting several jobs in medicine and the computer industry. He used this to his potential at early adulthood becoming one of the most powerful technopaths in world (much like Apocalypse). With his experience in health and medicine his mutation allowed him to repair his body quickly from massive injuries (much like Wolverine) and heal others (i.e., Elixir).

Above and beyond his powers emanate throughout the universe and was called upon and chose to become a host for the Phoenix Force. Much like Jean Grey / Dark Phoenix he was set out to destroy unimportant and war infested galaxies, but chose very hard not to eliminate them due to his peaceful nature.

This is when he got in conflict with Galactus. With his powerful never-ending telekinetic and telepathic powers he decimated and turned Galactus into dust particles with a blink of his eye and made his entire entity remain as dust in order not to destroy any more worlds and/or galaxies.

During the Age of Apocalypse, he created an alternate universe to lock Apocalyse into vacuum forever and telepathically altered his mindset to think that he was still destroying the earth and humans and making evil mutants flourish.

So yes telekinesis and telepathy are separate entities of power. But having both in conjunction with each other much like Eric Stealth has is an advantage and very dangerous in any comic universes. Eric still has not fully mastered his control of his alterego maniacal pure instinctual prowess of being a Dark / Cosmic Phoenix.

This is where he eventually led Charles into his his mind to figure out how to control it and prevent it from fully consuming him.

Not only are telekinesis and telepathy separate psionic abilities in the Marvel universe, which don't always correlate, but it is also the case that telepathy has many different subcategories, and not everyone has access to all kinds. For example, mind control, reading thoughts, reading memories, the ability to project your thoughts to others, psychic attacks, psychic shields, memory erasure, clairvoyance, and precognition are kinds of psychic abilities in the Marvel Universe; and their are various characters like Mesmero (mind control), Apocalypse (psychic shields and psychic traps) and Psylocke (psychic attacks) who only have access to one or a few of these abilities, not always all of them.

1
Why can't Xavier move his legs with his mind?

10
Is there a set limit on mutant abilities, where they're deemed too unrealistic?
11
Only Professor X goes bald due to his psychic powers, why?
11
Story where telekinesis is used to stop nuclear bombs
5
How does Professor Charles Xavier's telepathy/telekinesis work?
1
If telepaths can influence minds, why don't they fix the world and bring peace?
12
People connected by telepathy