My girlfriend has been looking for this story for some time now, as it was one of her favorites from her childhood. She says it has a pilot of a spaceship which travels by dimensional jumping, and every time they jump, he sees alternate versions of himself. He begins to see a happier version of himself, and doubts his choices in life. Anyone have any ideas?

It's the Hugo-award winning Cascade Point by Timothy Zahn. I can't find a Wiki page, but it fits your description to a tee. I re-read it just a few weeks ago, in fact, an everything you state above is accurate, though obviously you are missing some facts that your girlfriend likely wouldn't remember from her childhood, such as the twist at the end. It would have already been two decades old when she read it, but it's been re-printed regularly since it's release in 1984. My own version is from 2010.

I won't spoil it for you and your girlfriend by reminding her of any extra tid-bits, since it's the sort of book you really should buy. It's that good.

Although it's not the right answer, I felt that it's worth pointing out that what you've described is basically the plot-line of an episode of Red Dwarf entitled "Dimension Jump", in which 'Ace' Rimmer uses an experimental spaceship to travel interdimensionally.

On his first mission he encounters Arnold Rimmer and is disgusted by him. After some comparison it's revealed that their lives diverged when 'Ace' was held back a year in school. 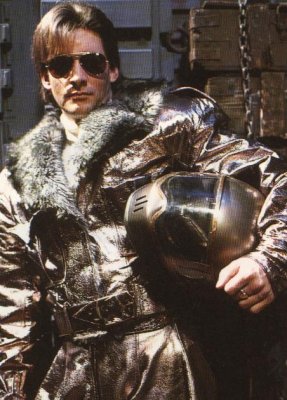 A Rimmer from an alternative universe, known to his friends as Ace, test pilots an experimental spacecraft for the alternative Space Corps. He arrives in our universe, where he crashes into Starbug which is forced to land on the surface of a desolate water planet. Ace, seeing their predicament, comes to their rescue.

Smoke me a kipper, I'll be back for breakfast!

43
Book from the 70s: Battle/Balance between Light/Sun and Moon/Dark?
7
What's that hard scifi novel I read about exploiting the discovery of a wormhole?
6
80s-90s horror movie about traveling to an alternate dimension?
5
Looking for young adult series from seventies about world, dimension traveling children
25
Sci-fi movie with one survivor and an organism(?) recreating his memories
13
Looking for title of short story about octopus that develops intelligence on spaceship
7
Manga where a man is being haunted by his dead female childhood friend that follows him around