I remember seeing this movie in the early 1960's. As I recall, an astronaut was launched into space, the spaceship was lost and he was presumed dead. But he had actually gotten back to earth and had become a "radiation monster".

His head was oversized, spherical in shape and had pock-marks that looked like someone has taken an ice-cream scoop to the head. He killed people just by being near them since he was sending out radiation all the time.

That's about all I recall - aside from getting the bejeebers scared out of me. I think I was about six at the time!

story-identification astronauts
Share
Improve this question
edited May 9 '14 at 23:18

It sounds a lot like "Monster a Go-Go!", released in 1965 and often considered one of the worst scifi films ever made. 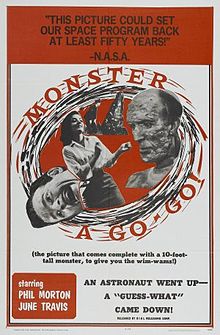 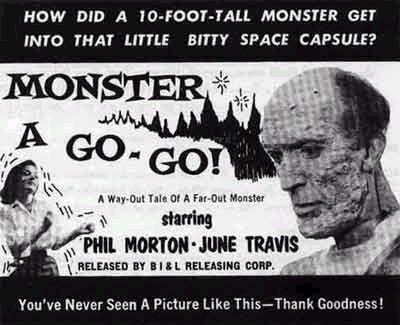 When a kid I saw a film with that plot, First Man Into Space.

It starred Marshall Thompson, who later played "Daktari" in TV show of that name. At the film's end Thompson asks the captured man/monster why he'd done what he did; the (dying?) monster replies

"I just had to be the first man in space!"

Rivalry between brothers leads to main story line. Navy Commander Chuck Prescott(Marshall Thompson)has developed the Y12 aircraft to test how far man can go up in the atmosphere.

His brother, Lt. Dan Prescott(Bill Edwards), seems to be the best test pilot around and is chosen to go up in the Y12. Dan of course has a problem with taking orders and is also an over confident daredevil.
On Dan's second flight, he hits over the 300 miles up comfort zone and his craft passes through a meteor dust storm. Returning to earth, Dan becomes a monster that resembles 200 pounds of bad asphalt. He also has a demanding craving for blood, whether it be from farm animals or fellow human beings.

Short runtime of an hour and seventeen minutes; black & white with near stoic acting...typical of low budget sci-fi.

Rounding out the cast is Marla Landi, Robert Ayers and Carl Jaffe.
Noteworthy trivia: about two months after this film was released; the Russians put the real first man in space. Scary as hell

Not the answer you're looking for? Browse other questions tagged story-identification astronauts or ask your own question.

10
50s or 60s movie similar to Invasion of the Body Snatchers
10
80s Sci-Fi movie with a monster-astronaut
14
Movie ID: 50s/60s time travel film with *terrible* plot holes
6
50s/60s scifi movie about 3 astronauts that go into space, but only one returns
5
Late 50s early 60s sci-fi film: Astronaut becomes melded with his equipment
21
Short story about an astronaut who comes back to earth and lives a few seconds in the future?
9
50s/60s movie with round disks on the back of people's necks