The Bechdel test originated in ‘The Rule’, a 1985 cartoon by Alison Bechdel.

In it, a character describes the test as something she uses to determine which movies she'll see:

One, it has to have at least two women in it, who two, talk to each other about, three, something besides a man.

If a movie fails the test, she doesn't see it. She notes that the last movie she could actually see was 1979's Alien. 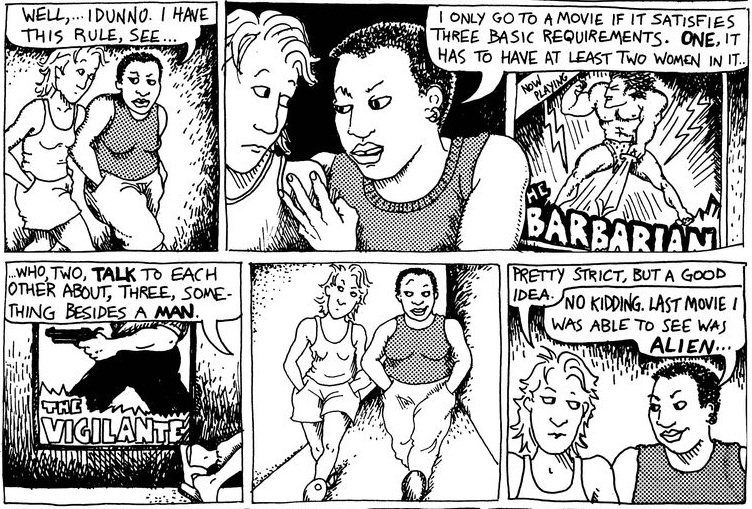 However, I'm not sure that Alien actually qualifies.

As I recall, there are two female characters: Ripley and Lambert. I don't remember them actually having a significant conversation in the film. The best I can remember is Ripley trying to get Lambert to pull it together after Captain Dallas is killed, and that's arguably a conversation about a man.

Also, this is a convo with >2 people but as part of it they exchange replies with each other:

Lambert: What? And end up like the others? No … no, you're out of your mind!
Ripley: You got a better idea?
Lambert: Yes! I say that we abandon this ship! We take the shuttle and just get the hell out of here! We take our chances and … and hope that somebody will pick us up!
Ripley: Lambert ... the shuttle won't take four.
Lambert: Well, then why don't we draw straws and ...

and in Direcor's Cut only:

Lambert: [slapping Ripley] You b&^&^!
Lambert: You were gonna leave us out there!

Found the script, and I think this scene should count, though Parker is present and has one line:

And, as Monty129 points out, they are technically not talking about a man if the subject is Ash, even when they discuss whether one of them has slept with him.

There have been a few Bechdel test questions in the last day or so. For future reference, there is an existing website that analyzes many movies under the test, at http://bechdeltest.com/

According to that website, Alien passes for the reasons identified above: http://bechdeltest.com/view/13/alien/

Aliens similarly passes, based on the multiple conversations between Ripley and Newt: http://bechdeltest.com/view/283/aliens/

Alien 3, however, fails the test as it lacks a second named woman: http://bechdeltest.com/view/296/alien_3/

Not the answer you're looking for? Browse other questions tagged alien-franchise alien-1979 bechdel-test or ask your own question.