Did the Asgardians need the Tesseract to rebuild the Bifrost Bridge?

At the end of Thor, as Thor is destroying the Bifrost Bridge, Loki says

If you destroy the Bridge, you'll never see her again!

The implication is that without the Bifrost Bridge, there is no longer an easy way to get to Earth.

With the Bifrost gone, how much dark energy did the Allfather have to muster to conjure you here, your precious Earth?

At the end of the movie Thor returns to Asgard via the Tesseract. In Thor 2, the Bifrost Bridge has been fully restored.

Not without hurting or killing Odin.

There’s a Marvel comic called Thor: TDW Prelude which takes us from the end of Thor (destruction of the Bifrost) through The Avengers and to the beginning of Thor: TDW. I answered a similar question last year, and quoted this panel (which handily answers your question, too): 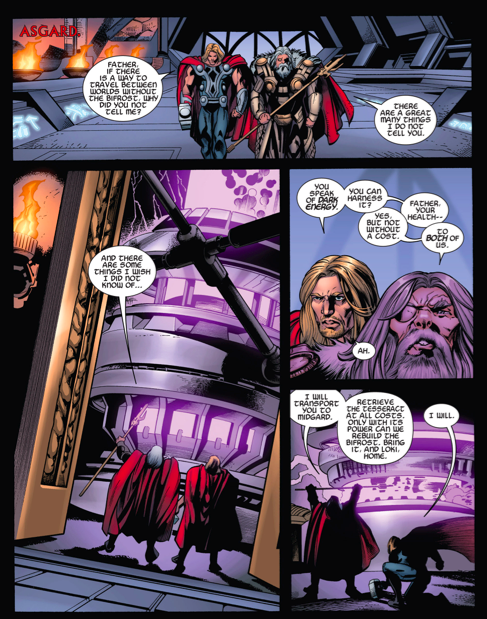 Retrieve the Tesseract at all costs. Only with its power can we rebuild the Bifrost. Bring it, and Loki, home.

I think we can take this as canonical confirmation that the Tesseract was necessary to reconstruct the Bifrost.

However, there is this panel in the second issue which I find a little ambiguous, as Heimdall and Thor rebuild Bifrost: 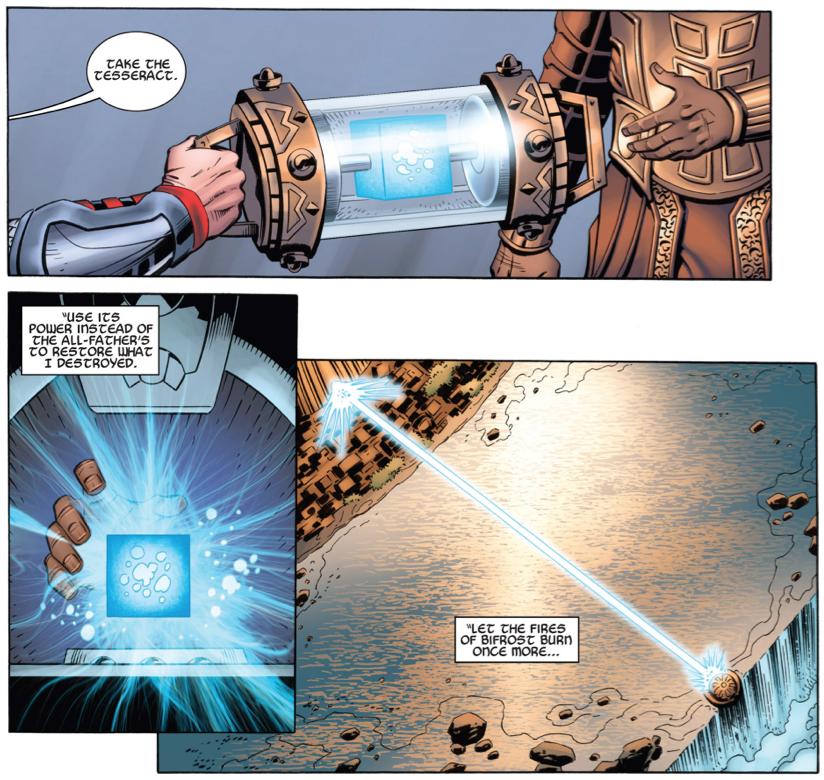 Take the Tesseract. Use its power instead of the All-Father’s to restore what I destroyed.

You could read this as meaning that Odin could have restored the Bifrost himself, but at great personal cost (quite possibly death). I’m not sure how to interpret that line, so I’ll leave it up to you.

After thinking about this some more, I think this means that Odin’s magic alone could have repaired the Bifrost, but at great personal cost (potentially death). But I don’t think this would have been a viable option.

Not the answer you're looking for? Browse other questions tagged marvel-cinematic-universe marvel thor-marvel thor-the-dark-world or ask your own question.

22
How does Thor get back to Earth in the Marvel comics?
14
Why did Thanos give the mind-controller Scepter to Loki?

12
Do the Jotuns have a Bifrost of their own?
9
How did Thor and Loki Return to Asgard?
14
How long after the Avengers does Thor: The Dark World take place?
56
What's under the crystal bridge in Asgard?
25
How does the Bifrost still work after the destruction of Asgard?
5
How did Asgard's army travel to Vanaheim in Thor: The Dark World
1
How did Thanos know the Tesseract would be with Loki on the Asgardian ship?
16
Why did Loki say Thor can't see Jane if he destroys the Bifrost when space travel was a thing?