What makes up Midgard?

a small planetary body that serves as home to the Norse gods such as Thor, and their ruler, Odin. It exists in another dimensional plane and is about the size of the United States.

There is currently no completed entry for Midgard, but the Asgard article addresses it briefly.

Another of these worlds that is in a different dimensional plane is the world of Midgard, or Earth.

Midgard, or “Middle Realm”, is home to humans and does not seem to be affected by the motion of the other worlds of Asgard. Jotunheim is the world of the Giants and is also on its own dimensional plane hidden from Asgard or Earth’s. The only thing that prevents passage between Midgard and Jotunheim is Jormungand, the Midgard Serpent.

The term "dimensional plane" mentioned evokes the concept of parallel dimensions/universes, a concept not foreign to Marvel Comics.

What defines Midgard and its boundaries? Is Midgard just the planet Earth? Our entire Solar System? The entire Milky Way? An alternate universe?

For Marvel Comics, Midgard is the entire single Universe that was once separated from Asgard. Matter in the Asgardian realm was more molecularly dense as are the natives of that realm. The common parlance used by most Asgardians seems to imply that Earth, specifically, is considered to be Midgard, proper. 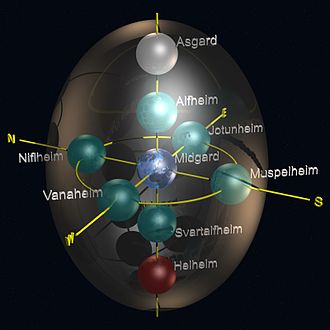 Midgard (an anglicised form of Old Norse Miðgarðr; Old English Middangeard, Swedish Midgård, Old Saxon Middilgard, Old High German Mittilagart, Gothic Midjun-gards; literally "middle enclosure") is the name for the world (in the sense of oikoumene) inhabited by and known to humans in early Germanic cosmology, and specifically one of the Nine Worlds in Norse mythology.

1
In the Marvel universe(s), is Midgard just Earth, or does it include the non-godly space stuff (e.g. Kree, Skrull, Shi'ar, etc.)?
29
How are the Nine Realms situated in space?

14
In Marvel Comics, why did the Asgardians cut off contact with Midgard (i.e. Earth)?
8
Why are the Frost Giants in 'Thor' so short?
2
Does the attempted invasion of Midgard by Frost Giants figure into any Nordic myth?
32
What makes this character worthy to lift Thor's hammer, Mjolnir?
6
Who makes the X-uniforms?
6
What makes Dr. Stephen Strange special?
12
What makes Earth special in the MCU?