How did A. E. van Vogt pronounce his last name? Does it rhyme with joked, goat, or go? I'm looking for an authoritative answer, preferably a direct quotation from Van Vogt himself or a personal acquaintance. The following remarks, quoted from the Wikipedia talk page, are not very convincing:

Ben Bova introduced me to Van Vogt at the WorldCon back in '76 and I thought he pronounced it "Vo" as in "go", but I could easily be wrong about this....

The witness could have misheard or misremembered, or Van Vogt may have been too polite to correct a common mispronunciation of his name.

Vogt is pronounced as "vote." The "g" is silent. My encounters with this pronunciation include a pun, I think by Forry Ackerman, something about "he gets my Vogt for" a distinction; and visits to a few science fiction conventions where Van was introduced.

No doubt Ackerman would have known the correct pronunciation. However, it was not his pun; Ackerman quoted it in his introduction to Van Vogt's collection Monsters, attributing it to the 19-year-old fan Ray Bradbury in a 1940 letter to the editor of Unknown Fantasy Fiction. Anyway, "vote" and "voked" are close enough for a pun.

Alfred E. van Vogt (rhymes with "joked"), "Van" to intimates, was born in 1912 in Manitoba of Dutch descent. He lived in various parts of Canada until in 1944 he moved to Los Angeles where he has resided ever since, recently becoming an American citizen. He is a tall moose-like man with angular features; a pince-nez secured to one prominent ear by a golden chain gives him a quaintly old-fashioned air. He has a gentle, courteous manner and loves to talk about theories of education and psychology. During the last couple of years he has been a dianetic auditor. Between Dianetics and the revision of his novels for book publication he has produced little magazine copy lately, but expects to do more henceforth.

I was considering submitting this as an answer and accepting it; however, Richard's contrary answer is even more convincing.

Update. Thanks to all who answered or commented. The information about the etymology of the name Van Vogt and its pronunciation in High German, Low German, and Dutch is very interesting, maybe more interesting than my original question. My question, however, was not about the authentic "old country" pronunciation, nor about how Van Vogt pronounced his name as a child speaking Low German, nor about how the mature Van Vogt would pronounce the name in the company of his parents, blood relatives, or childhood friends, now was it about how anyone else named Vogt may have pronounced it. The question was about how Van Vogt himself, as an adult (or better yet, as an established author), in an English-speaking setting, would pronounce his own name, or how he would advise English speakers to pronounce it. The only plausible choices for an anglicized pronunciation of Vogt are "voked" (as in "revoked") and "vote". I accepted Richard's answer because it cites earwitness testimony to Van Vogt personally endorsing the "vote" pronunciation. As noted above L. Sprague de Camp voted for the "voked" pronunciation, and he should have been in a position to know; however, it's understandable that Van Vogt might have refrained from "correcting" someone trying to approximate the original pronunciation of his name.

It was also at this time that I learned how to pronounce his name: he was telling someone that the "G" in "Vogt" was silent, making it sound identical to "vote." But by and large he did very little talking. He seemed very happy to be there, though, and when my turn came, shook my hand with a smile. 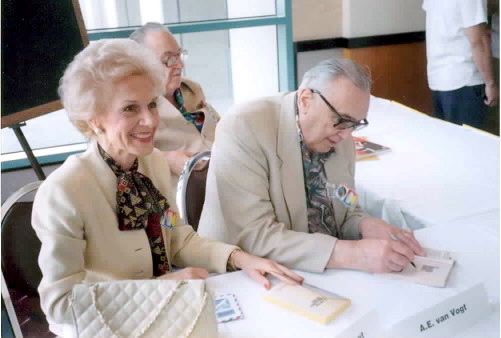 Additionally, Randall Garrett published a poem with the following title: "How to pronounce van Vogt" which was produced for the Omniumgathum, a vanity print of short prose and poems specifically intended to be read by members of the sci-fi writers community.

This poem was later reproduced in Isaac Asimov's Science Fiction Magazine, a magazine which regularly carried stories by Van Vogt.

Randall Garrett had met van Vogt on numerous occasions by this point and his poem clearly indicates the correct answer; Vogt to rhyme with wrote and mote (or as Wikipedia has it, /vænvoʊt/;).

The wikipedia page (not the talk page) has the pronunciation as /vænvoʊt/ or "vanvote" - which is the original German pronunciation of the word - http://www.pronouncenames.com/pronounce/vogt

I wanted to reply to KorusKol's comment, but apparently i need 50 (!) reputation to add a comment, god knows why.

The German pronunciation is very different from the American. Van is pronounced Fun (almost perfect match) and Vogt Fohgt (likely no soft 'V').

OP wanted to know how the man himself pronounced it and I imagine Van Vote is quite close.

Edit: Here the German version, "Michael Vogt" in this case:

I don't think we have any definitive proof to say for sure how he himself pronounced it. All evidence seems to be either hearsay or anecdotal examples where he himself may have adjusted the name to fit the audience.

I happen to be Dutch with a reasonable knowledge of German too.
Based on that:
We would pronounce Van Vogt as follows:
Van with a soft V-A sound and with no particular emphasis on any part of the word. (I don't really know a good equivalent in English.)
Vogt with a soft V-O and short O sound, similar to "vodka". And a harsh G, almost a K. The T is quite noticable too.
(Germans use a harsh F and change the O sound into something closer to "vogue", clear sample in the first few seconds of the video in Adrians answer.)

Low German as spoken by Amish and other immigrant groups in the USA is still very similar to modern Dutch/northern German (I have no problem understanding Low German) so it would be likely that during his youth he would have pronounced it like that himself. It is just as likely that in later years he gradually "Americanized" his name.

Not the answer you're looking for? Browse other questions tagged authors pronunciation or ask your own question.