The story is about a successful business man named Ben(?) who is very bored of his life.
He finds a old man - trader of rare things who offers him an amulet that serves as a key to the gate to another world where he would be a king.

After he agrees and the deal is done he travels to that other world, where he is nearly killed by a chasing shapeless monster in the "corridor". He finds himself in a beautiful land with a once prosperous kingdom, brought to its knees after the old king's death. The trader of rare things makes his living by selling this artifact to people of Earth hoping that they will run from the world as soon as they find out about the duel they have to fight.

The amulet has a secret power to summon a knight who is the king's own entity, although the bearer of the amulet cannot really control himself while the knight is summoned.

Here are a few memorable moments that might help to remember the books:

The king has a few loyal servants: a mage, who is really bad at magic. A huge, talking, bipedal dog - a former human, transformed by the mage who cannot return to his true form. A green woman (Silvida?) who the king marries while on a quest to unite the kingdom.

If somebody could help me to remember the name of these books, I'd appreciate it a lot! 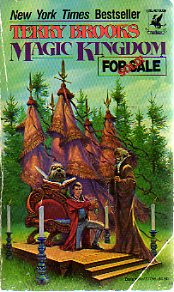 It fits your description perfectly, right down to the talking dog, the summonable knight, and the green woman.

11
Story about a soldier displaced into a fantasy world with elves and dragons
9
Obscure fantasy movie involving flying sea-galleons and a time weapon
8
identify book: fantasy series (?), protagonist priest, antagonist vampire king
25
Identify a fantasy series with ancient wizard who was training a young hero to fight a sleeping evil god
9
Fantasy novel where man buys house and discovers a portal to another world
18
Space fantasy novel - Human king, alien prince, telepathic plant-human hybrids
6
Seeking a picture book of short stories from the 1980s
8
Book: thief called Mar is hired by one of his targets to search the remains of an old civilization for magical artifacts; discovers he can do magic
7
Fantasy anime series with people from another world doing quests
21
Fantasy book: king's fool bound to him by magic, captive girl is secretly the fool's sister