Book Ident.? About kids getting sucked into video game

The book starts with the main character (a boy) living, I think it's like a foster home or boarding school. He doesn't have much money, however he manages to get ahold of a video game. This video game has a competition running, where the 5 lucky winners get to trial the new game!

The main character wins the competition with 4 others, and it turns out that the video game has developed into a universe of its own! The game's creator has a daughter who is very sick and dying. To save the little girl, the 5 kids must go into the game and find a vial to make her better.

This was the plot for the FIRST book.

Also in the books:

I read the books about 8 years ago. Publishing date I can't be sure... Though it can't be more than 15 years old.

It was published in English. I read it in Australia, however I'm pretty sure it wasn't an Australian author.

The name of the series is: The Karazan Quartet
The first book is: The Serpents of Arakesh 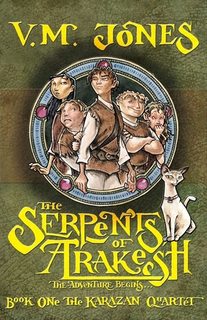 Twelve-year-old orphan Adam Equinox is an unlikely hero - a lonely, misunderstood underacheiver who gets into fights, and whose spelling has to be seen to be believed. One day Adam enters the Quest Golden Opportunity Competition, with the ultimate prize of working with the reclusive software genius Quentin Quested, test-driving his latest top-secret breakthrough in computer game technology. Adam is unbelievably chosen to undergo the final selection process. At Quested Court, Adam enters a world he never dreamed existed. A world of kindly adults and potential friends, in which the boundaries between fantasy and reality start to become blurred. Only when Adam and his companions begin the gaming workshop does Quentin Quested reveal their real-life quest into the parallel world of Karazan, where the Serpents of Arakesh stand guard over the most precious prize of all.

Not the answer you're looking for? Browse other questions tagged story-identification books video-games or ask your own question.