Was Buffy in an institution before "Normal Again"?

I've tried so hard to reconcile what I find to be a fairly blatant flaw in my favorite show...

In the episode "Normal Again" Buffy claims to have been sent to an institution when she first told her parents she was a slayer (before the beginning of the series). However, if this is true, it's hard to imagine Joyce reacting in the way she did when Buffy 'came out' in "Becoming, Part 2". One would imagine she would have more of a "Not this again" reaction as opposed to the utter shock and denial she showed.

I'd love some hard facts on this, but I'll gladly accept some good fanwanking theories!

Buffy says it herself. Her mom should have seen the signs. She should have known all along that she was still doing this, that she had washed blood out of her clothes enough times to know this was all going on.

Joyce was in complete denial, up to and including that her daughter had ever been to a mental institution.

My theory is that, since the inclusion of Dawn retconned the timeline, we don't know how the actual events of Buffy pre-S1 or even S1-S4 really played out.

The inclusion of Dawn must have had an effect, thus maybe changing the fact that Buffy went to an institution in the "Dawn" timeline and not in S1-S4 timeline. That's my only reasoning really. 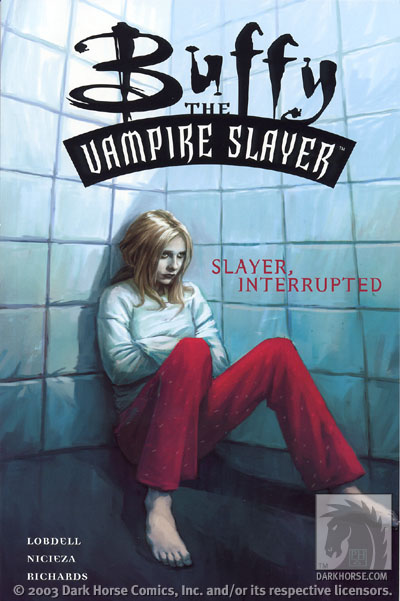 This was addressed in the 4 issue comic arc Slayer, Interrupted, which takes place during the summer of 1996 before she moves to Sunnydale.

After running off to Vegas, Buffy has written in her diary tales of vampires and demons. Her parents have her put into a mental institution. Whilst there Buffy realizes she enjoys the freedom, and the loss of her role as Slayer.

Many fans do not consider these stories canonical as they were not written by Joss Whedon or any of the show writers (hence the "maybe"), but Joss and crew signed off on the stories before being published.

Because she never left the institution.

Remember, at the end of Normal Again, Buffy is shown in the institution after all the poison and such has worn off and the Sunnydale story has moved on. Real-world Buffy is in an institution and creating a fantasy world in her mind where she is a superhero. Joyce's reaction is fully explained because fantasy-world Joyce does not remember doing what real-world Joyce did.

I mean the theory as it works is that everything in the "Slayer" world is a convient lie. Joyce reacting that way (the fact that the writters never exactly planned this much in advance aside...) isn't exactly relevant in IRL/institution Buffy's MIND. It's all convient enough to keep her there in that world, crafting Joyce's response isn't relevant because she didn't need it to be that realistic to her specifically. Not to mention she could just easily chalk it up to her mom being in denial because that was actually believable for her and it worked well enough to prevent her from getting too hung up on minor details that were irrelevant to her.

The basic idea here is that the "Slayer" world is all something Buffy is crafting in her head. The inconsistencies don't matter to her so that's how they are portrayed because the world isn't, supposedly, real.

Also I support the Buffy Multiverse idea, especially because they added the bit at the end where the doctor is trying to reach Buffy and she is gone. Theoretically speaking, the demon had the power to connect the mind of both Buffys and force her to flit back and forth between the two. Not that that is relevant to the question, but it's more interesting :P

Personally, I don't see anything too problematic with Joyce's response, for several reasons. For one, when we first see Joyce and Hank Summers in the institution, they are standing a bit further back, as though hesitant, which might suggest that they are cautious about getting too connected again after Buffy first 'momentary awakening'. But secondly, this momentary awakening that occurred when Buffy died, as the term suggests, was momentary, and might only have been minimal in terms of communication. So to actually see that Buffy is talking and becoming more 'lucid', as the doctor observes, provides Buffy's parents with hope that this time it is for real. Thirdly, I think it's hard to rationally judge the reaction of a parent whose child is in an institution.

But honestly it might be a danger to overthink and over-analyse these things, especially since the writers probably weren't thinking too much about the circumstances around Buffy's first awakening. In any case, I have come to believe that Buffy's slayer/Sunnydale world is, in fact, a delusion. As much as I wanted to believe otherwise, the evidence is pretty darn clear.

Buffy takes place in a multiverse, so therefore there's both a universe where it was real and one where it wasn't. It explains perfectly why you see stuff out of Buffy's perception in both worlds.

4
Why does Buffy have to keep it all a secret?

17
How do crosses/crucifixes work in Buffy?
12
Was there confirmed opposition to Willow's relationship in Buffy season 5?
4
Buffy in mental hospital
4
In S3E12 of Buffy The Vampire Slayer, why is Buffy so weak?
12
Why isn't Buffy paid?
2
Could Buffy have opened the portal?
4
Does Buffy eat garlic?
41
Why isn't Buffy a star athlete?
20
Who was the slayer before Buffy?
5
Why was Dawn sent to Buffy and not the "current" slayer?