What's the breakdown of Hogwart's Professor in Houses?

In the answer to my other question : Why aren't all Professors Ravenclaws? it was pointed out that Hogwarts Professors might be from any House. In actuality, were there an equal number of Professors in each House, or were the number skewed in favor of any House? Any official source (in particular, Pottermore) is acceptable to establish which House any person was in.

Here's a list of all professors listed in HP Wikia, sourced from here and here.

I have prepended them with their house if known.

I didn't bother including the 4 founders in this list but included them in the totals above.

A complete list, broken down by house and with canon sources. But for the impatient, here’s the tl;dr, in a pretty chart: 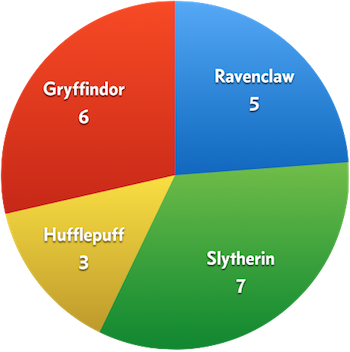 Not the answer you're looking for? Browse other questions tagged harry-potter sorting-hat or ask your own question.

35
Was it required at Hogwarts that a Head of House have been a student in that House?
14
What house of Hogwarts was Barty Crouch Jr. in?
5
Why aren't all Professors Ravenclaws?
9
What house were James and his friends in?

11
How Did the House Ghosts End Up at Hogwarts?
32
Who owns the Hogwarts house-elves?
10
What Year Is the Ford Anglia?
9
What's the point to the houses?
11
Amortentia - can smell change?
71
Why weren't Fred and George Weasley Placed in Ravenclaw?
39
Is there a Flaw with Gryffindor's "Characteristics"?
19
Ravenclaw House - is it really a good place for eccentric people?
2
Previous winners of The Angus Buchanan Cup for Outstanding Effort in Hogwarts
6
Was Albus Dumbledore the member of the Wizengamot during the late 1920s?