I'm looking for a story I read about 20-30 years ago in a short story collection. It involves a man who builds a machine that looks like a large coffin, filled with clockwork gears. I can't recall if the plans for it came to him in a dream, or some other unidentified source, but he isn't sure what its purpose is. The machine makes ominous clicking noises and disgorges a bunch of little clockwork "mice" on wheels, which go on a thieving spree, stealing watches and things to bring back to the "coffin", which makes more mice. The narrator tries to capture a mouse at one point and it stabs him with a blade he recognizes as a stolen surgical scalpel. The builder and the narrator manage to destroy the coffin at the end.

I can't remember the author or title of the story or anthology. I think each story had a small black and white illustration at the beginning. I believe the stores were all older, written in the 30's or 40's. It definitely had a pulp feel to it. It was a very interesting story about self-replicating machines and I'd love to find it again. 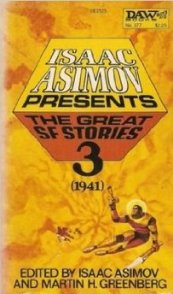 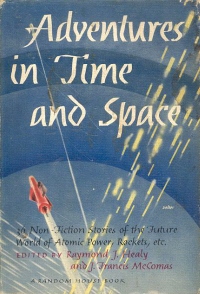 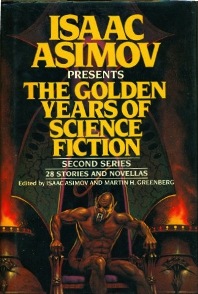 According to one review, here's the gist of it:

Dan Burman is a very rich inventor. 12 years ago, he had invented the "Burman Bullfrog Battery" – the greatest known power source for small portable devices. Now he has invented something new. Only he doesn't know what it's supposed to do!

He seeks help from a friend, Bill, and during this discussion, Dan reveals that he's not the real inventor of his famous battery or the new device. He stole their designs from the future!

His only genuine invention is a kind of crystal ball he calls "psychophone" – a virtual-reality time-travel machine that can take you to the future. And since it is impossible to go back to same time and place (again), a single session is all you have to learn what you can about anything.

This is how the new machine came into existence.

That is when the device – sitting in the same room – automatically springs into action. Arms stretch out to pick Dan's wristwatch...

It's a night of sheer terror. A jeweler is robbed. There's a burglary at the precision instruments shop. Several cats are also found dead on the streets...

Dan soon discovers what he has created: a robot programmed to survive above all else, even capable of giving birth! The brood has been snatching food and killing whatever comes in their way.

A short excerpt from the book. How Bill reacts when he first lays eyes on the machine:

It was a stunner. The thing was a metal box with a glossy, rhodium-plated surface. In general size and shape it bore a faint resemblance to an upended coffin, and had the same brooding, ominous air of a casket waiting for its owner to give up the ghost.

Another passage, this time describing the tiny thieves...

A score of houses had been entered and four shops robbed by things that had the agility and furtiveness of rats — except that they emitted tiny ticks and buzzing noises.

One was seen racing along the road by a homing railway worker. He tried to pick it up, lost his forefinger and thumb, stood nursing the stumps until an ambulance rushed him away.

Rare metals and fine parts were the prey of these ticking marauders.

The story has appeared in a number of publications, including the three featured on top. Read more about it here and download a .txt file of the full story.

The Mechanical Mice, by Maurice A. Hugi. Published in Astounding Stories in January, 1941.

... there came a very tiny, very subtle and extremely high-pitched whine. Something small, metallic, glittering had shot through one of the rat holes, fled across the floor toward the churning monstrosity. A trapdoor opened and swallowed it with such swiftness that it had disappeared before I realized what I'd seen. The thing had been a cylindrical, polished object resembling the shuttle of a sewing machine, but about four times the size. And it had been dragging something also small and metallic

Not the answer you're looking for? Browse other questions tagged story-identification robots steampunk or ask your own question.