A book about brothers with magical powers, set in southern United States

This is about a book series I read in the 80's or 90's. The books were about brothers in either Georgia or North Carolina. There was some sort of metal-sculpting theme thrown in. One brother was somehow twice as powerful because his uncle was his dad. He had a crutch that he affixed miniature figures to. The family was well off but the brother with the crutch was not raised as part of the family until his mid to late teens.

I've put this on a fantasy site because there was magic involved. It was modern, set in the south either Georgia or North Carolina. For their magic/powers to work they had to be completely "whole" when they were supposed to come into their magic. I believe the brother that didn't know he was related was a swimmer and injured himself. As it turned out he hurt himself just after the change.

Pretty sure this from Tom Deitz's Soulsmith Trilogy, consisting of Soulsmith, Dreambuilder and Wordwright. Ron Dillon, in a fall from high diving platform, is rendered lame and he loses his adoptive parents the same day. Sent to live in the Georgia backwoods with his aunt and a cousin. His real family, the Welches, are well off. He casts the miniature figures in shop class and adorns his crutch with them. And if I remember right his cousin is really his brother. The magic in his family does require you to be "whole" for you to be awakened in it. For this reason, the females in the family are disqualified by having their hymen broken before maturity. Ron, as it turns out, manages to have his power awaken prior to his leg injury, although it initially stunts his development. Also, those who have been awakened can only be killed by a particular method discovered at birth.

The crutch and its figurines play a part in the climax, as it turns out that his uncle's weakness consists of a 3 inch silver sword, driven into his skull with a blow from the crutch.

In the later books, there's a tinker who gives him advice about smithing. There's also a divination system that involves what songs come on the radio and he builds a Brazen Head from which to get advice. 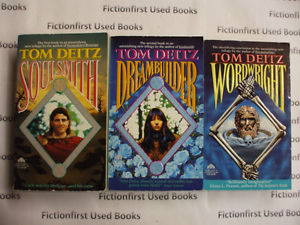 There are some similarities with books from The Tales of Alvin Maker series, written by Orson Scott Card:

5
Movie/Animation having an immortal man trying to revive his brother after 3000 years
9
Story about Angels in Revolution-era United States
11
Book series about shape shifters with an old lady and an orphan boy
7
Harry Potter fanfic where Harry runs away
6
80's-ish sci-fi movie with guy/car saving a girl (cyborg?) and car chase at the end of the movie
8
Strange book where teen protagonist is sent to a warzone, uses illusory magic to grow male genitalia
2
Manga about a boy who sacrifices himself to protect his parents from bandits, but is saved by a dragon