Short story about a house built in 4 dimensions

I remember reading it in late 80s - early 90s. It was part of a larger collection of sci-fi short stories.

The plot is about an architect who designs and builds a house for his friend in California, but the house has an extra dimension. When it's built and they go to check it out something is wrong - they only see one floor out of 4 (or 5) built just the prior day. After they enter it they realize the other floors collapsed into the first one, but only on the fourth dimension. All the rooms are intact, but intersect in weird ways. At some point they chase some intruders only to realize they are chasing mirror images of themselves.

They are stuck inside because all the exits loop back into the house. One room has windows to other strange places like an upside-down ocean or an alien looking desert. They can only leave the house if they don't think about their destination.

Apparently a small earthquake caused the problem because the 4th dimension of the house was not stable enough. They manage to escape as another earthquake hits and end up miles away.

The story you're after is "—And He Built a Crooked House—" by Robert Heinlein, originally published in Astounding Science Fiction. 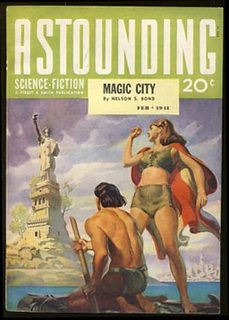 The full text is available here.

You're looking for the 1940 short story "—And He Built a Crooked House—" by the late, great Robert A. Heinlein.

I've read it in two places: Heinlein's collection The Unpleasant Profession of Jonathan Hoag, and Isaac Asimov's anthology "Where Do We Go From Here", a group of stories that the good doctor used to point out scientific concepts. (In the case of this story, the concept of a fourth spatial dimension was the concept in question.)