I have been trying to figure this out for years. There is another posting that is similar, but I'm not sure if it's the same.

Female protagonist, I don't remember how she finds herself on the alien planet, but she is injured or stranded or something so the aliens transform her into one of them. From what I recall they are frog like, forest dwelling, and I vaguely recall telepathic communication?

At some point there are other humans, and she turns back into a human. I remember a really bizarre, out of place, graphic sex scene with a fellow human.

Also for some reason I keep thinking the author was maybe Swedish or Danish? 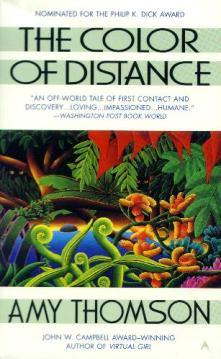 Possibly "The Color of Distance" by Amy Thomson.

The book opens from the alien perspective with the frog-like inhabitants of the rain forests of a world called Tendu. The elders of one of their tribes find a bizarre new animal on the verge of death and perform a miraculous feat of bioengineering in order to save it.

The creature's name is Juna, and she's part of a human survey mission to the planet. Her scout ship crashed and her crew -- clad in environment suits -- had been forced to try and hike back to base camp through the dense Tendu forest. Their suits ruptured during the trip, exposing them to an atmosphere to which their bodies were violently allergic. Everyone else died, and Juna expected to join them.

She didn't, a fact that amazes and horrifies her when she awakes to find herself transformed into something resembling the aliens. She's able to breathe without life support, has a strange skin that reacts to her moods, and razor-sharp talons. After choking back her fear, she begins making contact with the intelligent aliens, hoping against hope that she can still get to her mothership before it leaves.

Somewhat different from your description, but the alien race communicates by altering their skin colour:

As with many Earth frogs, they can change their skin colour. What started as camouflage and simple colour signals has evolved into a sophisticated symbolic language, presumably along the lines of Egyptian or Mayan hieroglyphs.

There definitely is a lot of sexual content. I won't go into the details, but here's how the protagonist reacts during one such scenario:

Her skin felt warm, as though a lover had been stroking her. She opened her eyes. Her skin was a brilliant, metallic gold. Was this the color of sexual arousal? The aliens were the same shade of gold. Juna fought back a wave of panic. Did this mean they wanted to have sex with her?

Also, the protagonist does transform back into her human form. This (weird) conversation between Juna and Bruce, her new "human" lover, should illustrate that.

“What are you thinking?” he whispered.

Juna laughed. “I was just thinking how good it is to have nipples again.”

“I wouldn’t have minded you without them,” he said.

“But it bothered me,” she replied.

“I could have gotten used to it, Juna. I was willing to try.”

You can read the novel in its entirety here.

12
80s horror book with a man crouched and eating a leg on the cover?
6
A book where a man inhabits the body of a dying man and befriends a telepathic cat
8
Short story that takes place in post-apocalyptic Georgia, "civilization" lives inside geodesic dome cities?
3
Seeking a kids' show involving a frog prince
11
Searching after a science fiction book/series about Galactic war with a weaker Human/Alien Alliance vs. Another hostile alien race
5
What's the name of this 80s SciFi Alien movie
8
Strange book where teen protagonist is sent to a warzone, uses illusory magic to grow male genitalia
8
short story involving symbiotic space suit and a war against aliens