I read this story in an anthology and really liked it, but can't remember the name or author. What (I think) I remember: The story centers around a young man who lives in a mining colony on Pluto and is quickly falling in love with a young woman he meets there. There is trouble brewing on Earth - something about a new and cruel government that is sending a ship to Pluto. The colony leaders decide to build three generation ships from available resources and escape in three different directions. The young couple make plans to be certain they are on a ship together. The generation ships are completed but the ship from Earth surprises them by showing up early, in a panic the young man gets on a ship without a thought for his girl friend and escapes without her...

In the end it takes him ten thousand years to finally cope with the remorse he feels about what happened.

He becomes one of the circle of leaders on the ship. They (the leaders) take a drug that makes them essentially immortal. The idea being that they will be the memory to keep the future generations on the ship from drifting from their goal of escape to a new world. If I remember, the estimated travel time was tens of thousands of years. The leaders DO end up aging, but they slowly (over thousands of years) use technology to embed themselves into the ship. I'm not explaining that quite right...they create life supports and interfaces with the ship to keep themselves alive. The main character - who ends up being the last of the initial escapees remaining alive - over time becomes less and less interested in the generations on the ship, and becomes more introspective and extro(?)spective, and more and more a part of the ship. In the end the ship is intercepted by another (friendly) ship from earth. A case of technology advancing past the initial state at launch. The people on the new ship offer to take away the 'beings' on the generation ship and leave the main character to his thoughts. They are no longer really human, as ten thousand years have passed, enough time for the species to change entirely - the generational travelers have devolved, and he has basically merged with the ship.

I believe I read it within the last three years or so, but have no idea how old the anthology was that I read it in - my impression from memory is that it might have been just as recent.

I'm pretty sure that's Mayflower II by Stephen Baxter, published separately as a chapbook but also collected in Resplendent. It has all of the elements that you mention, except that there are five ships rather than three and the protagonist's voyage lasts 25,000 years rather than 10,000. 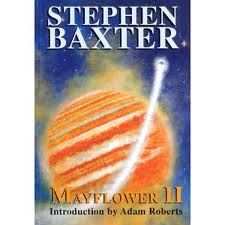 The story begins on Pluto in the distant future. Its inhabitants, former collaborators of the Qax, humanity's erstwhile conquerors, are under attack from the new-formed Coalition, seeking revenge for humanity's enslavement. As such, the inhabitants send five generation ships out of the solar system in the hopes that they will be able to form colonies of their own that can survive the Coalition. Rusel, the protagonist, is admitted onto Mayflower II, one of the ships, at the last minute.

Shortly after takeoff, it is revealed that the ship's intended destination is outside the galaxy, requiring a flight time of 50,000 subjective years, even with the effects of time dilation. The ship's captain selects a few individuals to receive medical treatment granting them immortality, allowing them to guide the ship through its millennia-long voyage. Over time, however, these individuals die through malfunctions or boredom, leaving Rusel as the only immortal on board, but he becomes increasingly dependent on life-support and gradually merges with the ship.

Not the answer you're looking for? Browse other questions tagged story-identification immortality generation-ship or ask your own question.