I'm searching for the title of a series of juvenile science fiction books.

The books are specifically written for young readers. They are really small and thin, have illustrations, and I believe they have extra material like puzzles and cast of characters in addition to the story.

I've read part of one of these books in Hungarian in a book store. They were probably translated from English. This was a few years ago, and the books were probably not much older either, because they mentioned an internet website recommended for fans to visit.

The story is about some invention that lets people temporarily transform to insects. A strange woman or man has invented and created six of these cubes (I think they were cubes), each of which let people transform to a different insect. She has lost the cubes, and the protagonists, who have befriended this inventor have to help her retrieve them.

The protagonists are two school-aged boys, twins (I'm quite sure of this), one of whom likes insects and wants to become an entomologist when he grows up, the other one hates insects or is afraid of them. In the one book I've seen the inside, they turn to locusts. The story takes place within one day of which they transform only during like half an hour, they are on recess and have to try to get back to school quickly before the next lesson starts, while they are probably pursued by classmates bullying them. The book describes how as locusts they get hungry very quickly because locusts eat a lot.

The book forms a series of probably 6 books (I'm not sure of the number, but there is definitely more than one book). I'm not sure in this, but I believe that in each book of the series the boys have to get one cube back, and so in each book they transform to a different species of insect.

What's really bugging me is how a recent book series should be easy to find on the internet from so many specifics, but so far I haven't got any luck. 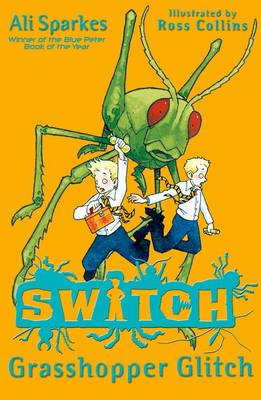 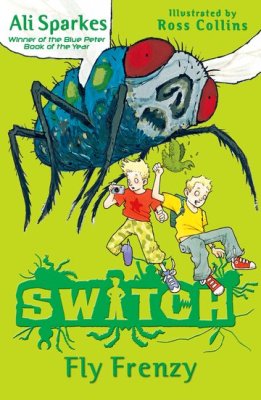 Are you thinking of the "S.W.I.T.C.H." series by Ali Sparkes?

S.W.I.T.C.H. (Serum Which Instigates Total Cellular Hijack) is a substance - in the form of a spray - that transforms the protagonists into insects and other creatures. One of the boys hates bugs and the other dreams of being an entomologist. Petty Potts is the scientist trying to recover the missing REPTOSWITCH cubes. Victor Crouch is the bad guy who's also after them.

Josh and Danny let Petty Potts—their barmy next-door neighbour and scientist extraordinaire—give them a lift to school, but after a mix up with their drink and some SWITCH spray the twins suddenly have five eyes, ears in their stomaches and a strange ability to chuck up brown goo.

The boys must SWITCH back before anyone notices they’re not in class. But school is the least of their worries—they’re just a whisker away from trouble—there’s a grasshopper-muncher on the loose . . .

Not the answer you're looking for? Browse other questions tagged story-identification childrens-novel shape-shifter or ask your own question.

26
Is Parseltongue a useful skill?

5
Sci-Fi novel (series?) about shapeshifting killer whales
5
Identify fantasy series with people having traits of different animals
9
What was this book (time-travelling kids, an old house, a wizard, turning into animals…)
6
Werewolf trilogy from the 90's
7
1970s or 80s kids' book series about friendly android doppelgangers
8
Fantasy series where protagonists are altered by frequent trips to another world
7
Book about a girl who can shapeshift into various forms, like hyena and squirrel