I can't remember any names of characters or locations where the story took place but I do remember the basic plot of this early 90's novel; a human man inherits his father's house. In the basement there is a doorway to a fantastic land where adventure ensues. He fights elves and wins their deadly elf swords which he buries under concrete at the end of the novel (because if you don't get rid of them they will come back and get you).

At the end of the novel he must remake the world in his own imagination, turning the tough Elf King into a cobbler and making Jesse Jackson President. I have been looking high and low and have drawn a blank.

Any help would be appreciated. Thanks! 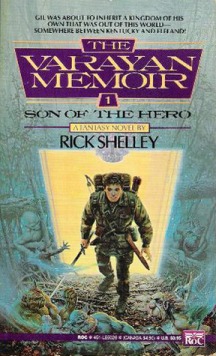 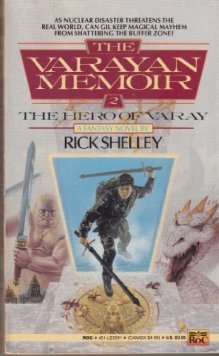 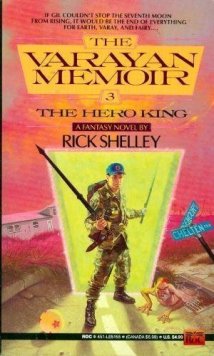 A guess: "The Varayan Memoir" series by Rick Shelley

Here's an overview of "Son of the Hero", the first book in the series:

When he comes home from college to celebrate his 21st birthday, our hero, Gil, is bemused to find his parents missing.

Looking down in the basement, he discovers a secret door that leads into a fantasy land, complete with elves, dragons, wizards, castles, and all the rest that you might expect.

Gil learns that his parents have been hiding a double life from him for all these years - he is actually the designated Hero of Varay and not only that, but the king's grandson and Heir to the Realm!

Although he was a computer science major, Gil is rather jock-like, and fighting and heroics seem to come naturally to him.

Which is lucky, because when he discovers that his father has been killed in Varay's struggle against the encroachments of Faery, he of course must *accept the quest to lead that struggle and seek his revenge.

Gil battles elves and other assorted creatures in the first installment. After defeating a particularly fierce elf, he is asked to claim the fallen warrior's sword. And we soon learn why an elf's sword should never be left behind:

I felt tired suddenly, fatigue just trying to swallow me whole. I stabbed the claymore into the sand at the elf's head.

"I wish I knew his name. He was really something fighting that dragon."

A true hero, I thought. I looked down. The magic I had felt from him before was gone. A supposed immortal had found that he wasn't, not by a long shot. I shook my head and started to walk toward my horse.

"You're not going to leave his sword, are you?" Harkane asked. His voice actually sounded pained.

Annick answered. "To leave an elf warrior's sword would be disaster. It would return to kill you."

"It will seek you out if you abandon it, though. That is the way of such weapons."

I haven't fully read the books. But the other plot point you brought up, about how the progagonist "must remake the world in his own imagination"? Something like that takes place in this series as well - towards the end of the third book, "The Hero King". On their return from the other dimension, Gil and his friend(s) pass by a newsstand. Here's an extract:

I turned away from the kiosk before I even glanced at the headlines on the papers. They started strange things going on in my throat. The words were in English, but they didn't all register at once.

"What the hell's happened here?" I whispered when I could get anything out.

President Jesse Jackson has announced that he will not run for a second term. Instead, he will embark on a goodwill tour to the home worlds of the members of the Federation of Sentient Races…

"Hey, you do that?" Aaron asked. He was reading over my shoulder.

7
Fantasy trilogy about a young man who travels into a fantasy world (doorway in a closet?) to save parents, who are royalty there
5
Need help identifying a fantasy series
3
Fantasy trilogy: Gill saves world, “in God we Trust” -> “in Gill we Trust”