Help. I recall reading a GREAT Sci-Fi story sometime in the late 70's or early 80's and can't recall the title.

In the book a man's consciousness is sent back in time and downloaded into the body of a young woman. His goal was to capture and download the consciousness of humans as they die so that they can be recovered in the far future and added to the whole of all humans who ever lived.

The book tied together life after death, the singularity (although that term was not used), and several other interesting plot threads.

One note: I think I recall that the first line of the book was "Every word in the story is a lie", and the last line on the last page was, "Every word of this story is true".

That's Time Pressure, the second in Spider Robinson's Lifehouse series.
You remembered it pretty close to correctly. It's actually from the late 80s, but feels older, since the main character, and many of the secondary characters, are hippies.

The opening of the book has a Prologue of:
I guarantee that every word of this story is a lie.

And an Epilogue:
I guarantee that every word of this story is the truth.

The woman in the story is actually a hybrid of parts of the minds of four characters from the previous book, Mindkiller, two of whom were male. They are beginning on a plot to infect the past with little nano-bots that become resident in every living person, and download all of their life when they die, this download to be stored in an 'Egg' which will then upload it in the future.

The world of the future has seen all of mankind meld together into a mass mind, although remaining discreet individuals, at the same time. With the massive power they have developed, they decide that any human ever having died is a loss, and they are basically trying to retroactively cure death for all of Humanity. 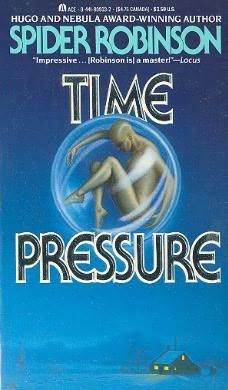 Not the answer you're looking for? Browse other questions tagged story-identification time-travel singularity or ask your own question.