Film about a dying Earth, so a crew of astronauts are sent to save human race in a distant planet

Film might be base on a novel from Stephen Baxter: Ark (2009) 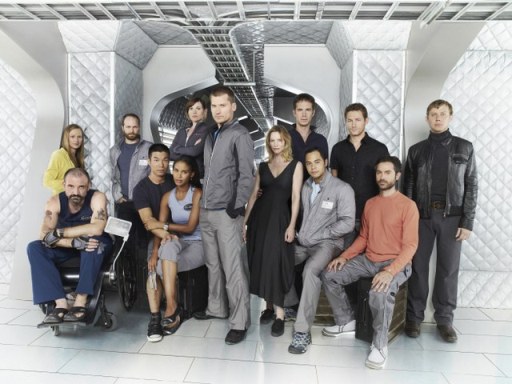 A spaceship from Earth is equipped with a virtual-reality device to help those aboard cope with their 10-year mission. But when the system malfunctions, it puts the Phaeton's crew -- and the fate of their planet -- in jeopardy.

From the movie's Wikipedia page, here are a few plot points:

The pilot picks up approximately six months after the launch of the Phaeton [and it's getting closer and closer to Neptune]. The crew now faces a "go or no-go" situation, in that they are fast approaching their last chance to change course back towards Earth.

However, their home planet is quickly becoming uninhabitable, with dry land becoming a commodity. Scientists estimate that the planet will become completely inhospitable within the next hundred years. The Phaeton's priority mission has been changed to that of searching out and discovering a new planet for humans to inhabit. 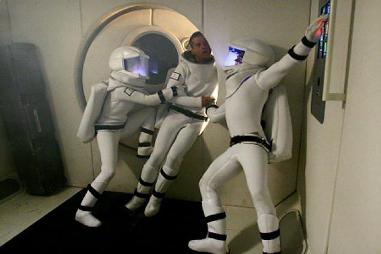 The AI begins to take control of the ship...

[Lately] the crew's virtual reality simulators have been experiencing several bizarre glitches, all of which involve a mysterious man, whose acts against the crew inside the virtual simulations become more and more disturbing. 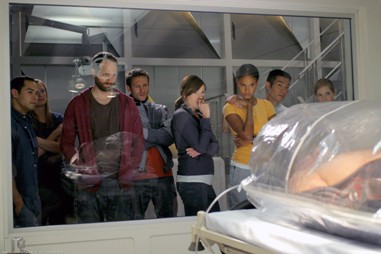 Commander Frank Pike is the one leading the mission. A description of the "accident":

The communications array fails to deploy, and after Dr. Jules Braun tries everything that he can from inside the ship, Pike, Rika, Val Orlovsky and Manny Rodriguez prepare to identify the problem from the outside.

While preparing for EVA [Extra-vehicular activity], the airlock chamber closes by itself, with Pike inside and without his pressure suit helmet. Despite efforts to save him, the airlock opens and Pike is killed.

~ Synopsis from allmovie; Images from DEN OF GEEK!, NY Daily News and TrekMovie.com

Read more about it here and here.

Not the answer you're looking for? Browse other questions tagged story-identification movie spaceship artificial-intelligence or ask your own question.

14
Short film series about a human crew with a doomsday weapon aimed at Earth
1
Film seen on television sometime in the late 1970s with astronauts returning to a changed Earth
9
Novel about astronauts returning to depopulated Earth
12
Short story about the human race pooling together resources to reach dying race
7
Alien attack novel, a team of humans are sent on a suicide mission with every human on earth to direct them
2
The human unconscious used to save a crew from Aliens
3
Movie about an alien probe that burns astronauts trapped on a planet