Can Magneto control light as well?

As Magneto has control of magnetism, can he create darkness? Light itself is an electromagnetic wave, and eliminating the magnetic part of light might cause it to be “invisible” to the human eye.

First of all, you can't "eliminate the 'magenetic' part of light". That's not how physics works. You can ask on Physics.SE for extended details. Having said that, light is an electromagnetic phenomenon, and as such can be manipulated by Magneto according to canon:

He can also generate electromagnetic pulses of great strength and generate and manipulate electromagnetic energy down to photons. He can turn invisible by warping visible light around his body.[93] - via Wikipedia, with ukltimate source Vision and the Scarlet Witch #4 (February 1983)

The short answer is yes. In the comic-book canon, Magneto demonstrates a wide range of powers that aren't seen in the films including a force-field strong enough to block the she-hulk and the ability to fly (whereas he only has the ability to influence metal in the films).

In "Vision and the Scarlet Witch : Vol 1 #4" we see him 'wrapping himself in a cocoon of metal' which he then uses to bend light around him; 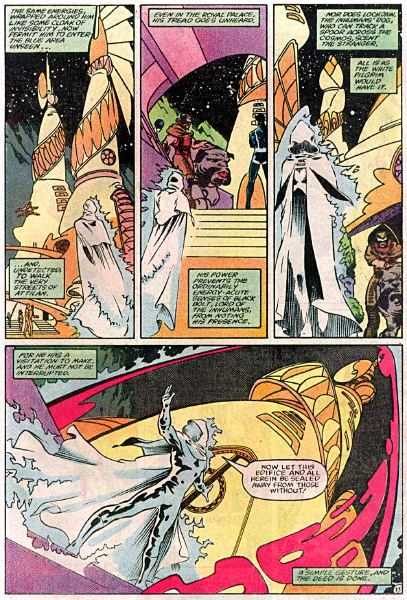 The same cocoon apparently allows him to 'traverse vast distances of empty space' without a space suit.

Then again, we're also talking about comic book superheroes. "Physics as we currently know it" may not be a very safe assumption.

I was looking for the actual Marvel Encyclopedia Entry, but no luck finding it online. However, several sources, from Wikipedia to fan made wiki's to the Marvel Database to a general Comic Book database seem to concur that Eric has an established control over the entire Electromagnetic spectrum.....

As a result of this, Magneto can logically manipulate all forms of energy which fall within that spectrum. These include [and I'm paraphrasing from the original encyclopedia article here] pure electricity, photons, light waves, heat waves, and even radio waves, though he is not as practiced in these forms as he is with pure magnetism.

There are examples of him using these other powers in the comics, but its been so many years and so many issues, I honestly am not sure where to begin searching.

Here's a picture of him generating pure electricity in Avengers: Disassembled .... 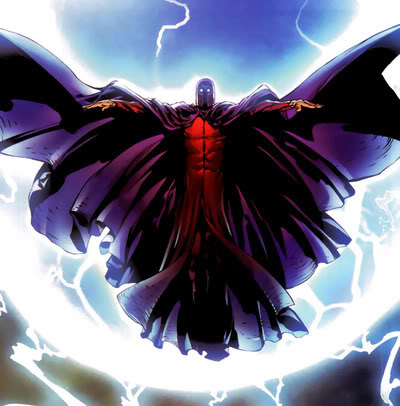 Here's one with him basically saying how he can control photons via his electromagnetism... 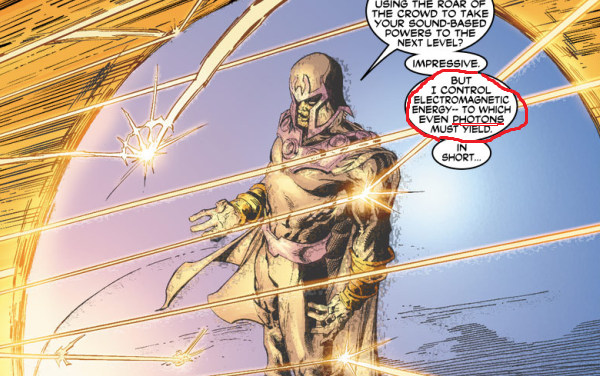 And here's an official Marvel informational describing some of his auxiliary powers... 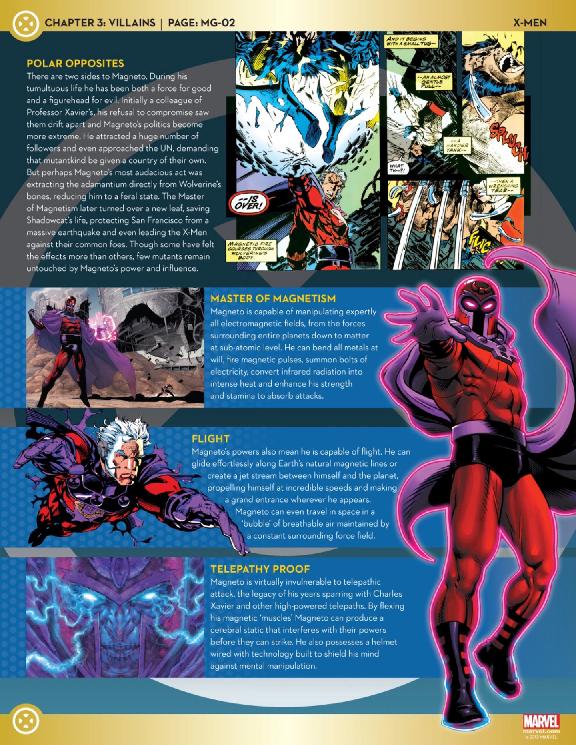 Note this section here, highlighted by me. It literally states, flat out, how he can control infrared [basically the higher spectrum of light] energy and heat, as well as magnetism.

I think that pretty conclusively shows that, via his control over the EM spectrum, electricity, light and heat are well within his range of control.

Now, to be fair, this is not the same as "Creating darkness", which is essentially the absence of light. I think what is being asked here is one of 2 things:

To which I would postulate..

Essentially, Magneto would be creating a similar effect of when there is a New Moon and no stars; because there is no perceivable light for our eyes to absorb bouncing off objects, it appears far darker than usual.

Just as Magneto can't control electricity, he can't control light. His abilities are strictly to metal. But he can still use metal to reflect the light.

1
What does it mean for Magneto to be able to deflect rays from nuclear explosions?

59
Is Magneto's power magnetism or can he manipulate all metals?
15
Are Storm's mutant powers plausible?
20
Can Magneto control Colossus?
8
Do Magneto's powers work at faster than light speed?
6
Why does Magneto control the wires instead of Shaw's helmet?
1
What does it mean for Magneto to be able to deflect rays from nuclear explosions?
5
Can Magneto detect magnetic objects without seeing them?
13
Can Magneto perform induction heating?