Why doesn't the lightsaber cut the guardrail in Episode 6?

But here, shortly thereafter, when Luke cuts off Vader's hand, the rail gets cut:

Does the Jedi convey some intent when striking with a lightsaber such that it only cuts through certain things at will? 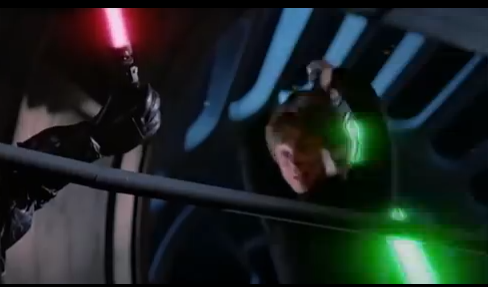 OK, so I've gone back to this scene a couple times. Things to note:

It is difficult to tell how much Luke knows about Vader's armor, but it is probably good to note here that the hand itself is nearly indestructible:

The Glove of Darth Vader was a Mandalorian Crushgaunt fitted around one of Lord Skere Kaan's indestructible Sith amulets. The gauntlet was worn by Lord Vader upon his right hand. Although both gloves for Darth Vader's armor contained micronized Mandalorian armor as a means to deflect direct hits from blaster bolts (a feature made redundant due to his Force abilities)

At the very least, Luke probably assumes that cutting off his dad's hand is not going to be as easy as making a one armed Ponda Baba - so he is really going for the kill on this strike, hence giving it the extra inertia/intent to cut through both Vader's armor and rail itself.

As for the question as to why the saber doesn't slice through the rail easily - there are various metals in the Star Wars universe (Mandalarion Iron is a good example) which are resistant. While that might seem convenient... if any room on the Death Star had some saber-proofing, it was probably this one.

Luke had become a much more proficient lightsaber combatant by that point, and was laser-focused on his enemy. He likely didn't cleave clear through the railing (which he easily could have) because he was already reversing the momentum to bring his lightsaber back into line for another attack or to defend.

Even in a rage, a decent swordsman will keep enough wits with him to have his weapon between himself and his enemy, not far outside and cutting through something pointless.

In short, you're trying to justify something using SW universe info that didn't exist until after the film in question was produced.

I always felt that it was the power behind the strike. If you look at the top photo, Vader is drawing back to strike, so Luke will have to pull his attack to defend so there wouldn't be enough power to cut the railing.

Not a great answer though, sorry. :)

14
What goes into the design of lightsaber hilts?
15
Why doesn't Luke's lightsaber cut Jabba's guards in Episode 6?
20
In Star Wars: "The Force Awakens," how could this lightsaber have turned up where it did?
27
Is Anakin's lightsaber the only one remaining from the 'Clone Wars' era?
20
Why was the colour of Luke's lightsaber changed from blue to green between the trailer and the release of Return of the Jedi?
13
Was Darth Vader's lightsaber on the wrong side to stop Luke from killing Palpatine?
10
Can Darth Vader "feel" his prosthetics?
2
Why didn't Obi-Wan incapacitate Darth Maul?
4
Did Luke have this necklace in his hut on Ach-To?