Why did Scotty attempt to talk to the computer?

The Star Trek IV: The Voyage Home there is a moment when Scotty attempts to talk to a computer:

What compelled Scotty to believe that the computer in the past would have had a verbal interface? In his own time there were very few instances of when the Enterprise computer responded to voice commands:

With so few verbal interfaces in his own time it would be odd for Scotty to expect any computer, past or present (from his point of view) to respond to his voice.

There are a number of TOS episodes that depict verbal interaction directly with the Enterprise computer. They include -

Additionally, there are episodes that depict verbal interaction with computers other than the main Enterprise one. They include -

There may certainly be others [additions welcome] but these were ones I easily recognized by reviewing an episode list. I don't think such interaction was as rare as the question assumes. Additionally, Scotty was the Chief Engineer of the Enterprise and would certainly have been knowledgeable (at a minimum) of the verbal interaction capabilities of the Enterprise computer. Add all these occurrences together with the obvious comedic factor and I don't find the movie scene surprising at all.

Scotty is well versed in all things technical and, very likely, highly versed in the history of computing. See "The Trouble With Tribbles", in which his biggest desire with his given "shore leave" is to instead spend time in his quarters, catching up on his "technical publications". He's a man with a true passion for his field of expertise; which plays into his being a miracle worker.

I am taking at face value that voice commands are not as common in the time period in which Scotty works. It is shown in the show on several occasions, but diminishes in frequency in the feature length films. I am working under the assumption that the films took a more serious approach to the science in their science fiction (or some combination of that).

Being well versed in the history of computing and technology, he may have been expecting to encounter an old time-y construct used in technology, when every manufacturer became voice command happy. If his memory is like mine, and I assume there would be one or two similarities (I write web applications), he likely remembers that such a fad phase of tech existed "around the end of the 20th century", and not exact years or specifics of "rudimentary" devices. As we're still within the range of "the end of the 20th century" and people have long regarded talking to computers for command interpretation to be "futuristic", I believe this to be the most probable rationale (as @zipquincy suggested).

Also, comedy, as this is possibly the most cheesy* of the TOS feature films (per @calccrypto).

*Note: I only ever mean "cheesey" in a diminutive sense, if there is one, when it comes to the ST universe. Some synonym in the direction of "corny" or "light hearted" would probably be better suited.

Kirk uses it in The Conscience Of The King to research Kodos The Executioner. This is similar in function to what Scotty is doing, and there is even an extremely remote physical resemblance between this computer and a CRT monitor. 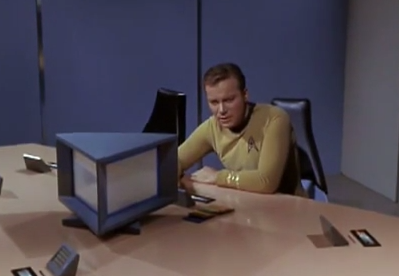 Recall that when faced with the keyboard, Scotty remarks "how quaint!"

The consoles one sees in the 23rd century display an interface that, in my opinion, appears somewhat customized to their particular purpose rather than being generic input devices.

It is plausible that in the 20th century, when faced with a computer that did not provide an interface for inputting chemical compounds, Scotty naturally presumed that he would interface with the computer by voice, possibly to verbally relay the chemical formula, or maybe to request the suitable customized interface.

For some reason they didn't use this feature much in the movies, my theory is that they had a better budget for high-tech looking displays and what-not, and that may have been deemed preferable to a verbal interface.

As a personal comparison, I instinctually reach for Command ⌘ instead of Windows Key, no matter how often I use a PC, or I try to scroll on a touchpad, even when using a very old laptop, or try to Swipe on an iPhone when not using my Android device. out of force of habit. Scotty is the most brilliant mind in the TOS universe, but he's still human. Humans are creatures of habit. The occasional lap in memory is to be expected. He quickly adapted when needed.

Very simple; he was used to it.

If we were to go into the past, you really can't blame us to try and search for a mouse on a terminal machine.

Although not officially canon, remember that in Star Trek III Search for Spock, Scotty had been working on the Excelsior - the latest ship of the time. With the voice-activated computer interfaces in the Constitution refit, it would be logical to expect that the Excelsior class would have more voice-activated computer interfaces than previously. Consequently, Scotty would have been used to it (building on what TrekAstar1 says).

29
Why did Scotty think Capt Kirk was alive?
21
Why did Scotty not recognize the inventor of transparent aluminum?
23
Why Did Scotty Not Go Insane?
26
Was Star Trek's original Captain Kirk always fond of antiques?
13
Where did Scotty learn to type?
94
Does Lwaxana Troi ever talk to herself (as the computer voice)?
16
Who gave Scotty the nickname "Scotty"?
3
How did Scotty infiltrate USS Vengeance?
2
Did Scotty cause the Klingon Tribble hunt?