The flash in Walter Bishop's eye

I have watched the entire Fringe series 3 times now, and am glad to say, I could connect (most of) the dots. On the other hand, some things simply have no explanation. One of these was the occasional 'flash' in Walter Bishop's eye. I was expecting a plot, a story, or at least a backdrop for this, but to my disappointment, there was no explanation of it even after the show ended.

I tried looking here, and here for some possible explanation. The wide consensus seems to be Cataract surgery, but being a JJ Abrams fan, and well, how everything in Fringe played out, I do not buy it just yet.

Any other possible explanations for this ?

No, it's definitely a John Noble thing, not a Walter Biship thing. It's also shown up in his narration of Dark Matters, a series completely unrelated to Fringe, and according to some places it was visible in works older than Fringe. (No reference here yet, as I have not seen the vast majority of what he's been in. I'll check the Stargate episode at some point, though) (Update 2017-05-25, see bottom of answer).

The running theory is indeed some sort of eye surgery, most likely LASIK, although I've not found any definitive quote.

IGN.com also has this to say on it:

Speaking of John Noble, I know at least one person is going to mention the oddness with his flickering eye in this episode. His eye has actually been like that for years. His odd ocular affliction is perhaps the result of some surgery, which was perhaps the result of a drunken fight with actor Omar Sharif, who reportedly smashed a table lamp in Noble's face during a meal after they wrapped up a day of filming on a movie they worked on together (further proof that John Noble is the most interesting man in the world). You can see Noble's trademark eye oddness in some Fringe episodes going all the way back to 2008 but it's particularly noticeable in a few scenes in this episode for some reason (lighting maybe?). Now, it remains to be seen whether the producers plan to incorporate this oddity into the story, but they've already featured that eye in previous episodes this season when Windmark tortured Walter and busted his eye. It could turn out to be something interesting for the story, but for now that glint in the old man's eye has a rather mundane explanation.

His eye had not been worked into the story by the end of the series. 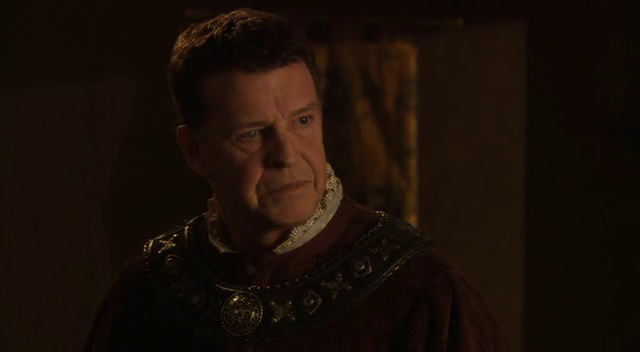 And another shot about 4 seconds later, just to show the character didn't have a false eye or something: 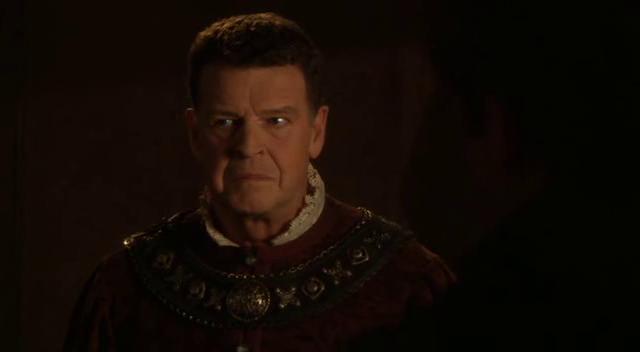 It's because he, in real life, suffers from an eye disease we in danish calls "Graa Staer" I don't know the Latin or English name for it. But it's very normal for people in his age, it makes it look like there is some reflections in his eyes, and it's actually his eye "linces" as I understand it.

I noticed the flickering and oddly shaped iris. I had Lasik done and when I went in for my check-up a year later, at close up she said I had tiny pieces of metal in my eye. She said it was normal for people who chose to use a blade to cut open the eye. Apparently there's a bladeless procedure now.

I can't speak for John Noble....but many of my friends have reported seeing the same thing in my own eye after having lens-replacement surgery. It's only visible in certain lighting conditions and from certain angles.

Lens replacement surgery is basically a procedure in which your natural lens is removed and an artificial lens is replaced. It's commonly used for cataract patients although (as with my case) it's also used to correct vision.

I don't know if John Noble has had the same procedure. But it's likely to be the cause of what we see.

I know it's an old thread, but I think I got it. I think I know what is that flash in John Noble's eye.

As all aging actors, remembering lines can be quite difficult. Thoses flashes are reflexions of the white cue-cards used by the crew to provide his next line.

Several conditions can cause a pupil to reflect like in John Noble's case (it's called leukocoria). Most commonly, it's caused by a cataract or a retinoblastoma (small tumor in the eye). certain surgeries, like LASIK, are also a possibility, but given his age, a cataract is very likely.

Working in cinema and knowing how sfx works I can assure you, there is no plot behind that eye!

In the end, even if it was a plot, producers tend to want something for their money, and putting a glimpse in Walter Bishop would not be free. So unless an question is raised in one episode and not answered in another by lack of money or time or interest, their usually is a reason. Here, none!

As I am just reviewing all the seasons right now I can tell you that there are some things that don't go together, telling us that such a subtle thing would not be interescent.

For example at the beginning of Fringe they use the idea that "deja vu" is explained by the existence of several universe, you'd have a glimpse of... Later, in the time travelling episode in season two, they use the same idea of deja vu, but with another application : that you'd have deja vu because you are in track with your destiny.

So if a big argument is lost between two season, what of such a tiny detail?

It's definitely something the actor have.

It's a product of cataract surgery.

It is in almost every single episode, of every season. I thought eye surgery and started googling to find an answer, there is no definitive answer. I then went back and watched several episodes where the eye flicker is most notable (Season 5 Episode 7, 7 - 8mins in). In some episodes, like the one I just mentioned, it shows the eye clearly deformed, no iris, a square-like pupil, crystal-like reflections as if the eye was make of glass and had some cracks... This is not simply light reflecting off of a prompter or lighting on stage etc. It is most definitely one of 2 things, either it's put in via editing (i.e. on purpose), or he is some type of shapeshifter that needs his eye fixed. The former seems most likely, but science is progressing, time travel was already achieved on an atomic scale, keep an open mind. Eyes Wired Open.

19
Why there is a cow in Walter Bishop's Lab?
4
Did William Bell alter Walter?
19
Why did Walter use video tapes in Fringe?
14
How could Walter send Peter the letter in the last episode?
4
In Fringe 2x16, How could Walter have copied the RAZR device?
9
Why doesn't Walter rebuild a window?
12
What paradox was Walter Bishop's plan supposed to avert in the series finale of Fringe?
5
In which Fringe episode did Walter enter the wrong house and slept there for three days?
1
Why is Walter baffled that their attack failed in the Portal Shipment Lane?
6
How did Walter send back the Machine in the Amber Timeline?