Where did the Millennium Falcon learn to communicate?

THREEPIO: Sir, I don't know where your ship learned to communicate, but it has the most peculiar dialect. I believe, sir, it says that the power coupling on the negative axis has been polarized. I'm afraid you'll have to replace it.

Is it ever explained what dialect the Millennium Falcon's computer had, or why it was so "peculiar"?

Within the film canon, there's no specific indication of the reason why the ship has a peculiar dialect other than its generally "cobbled-together" nature. On top of that, whenever we see the ship at rest it's invariably in a constant state of repair using a mix of parts sourced from wherever Han can get them cheapest.

The ultimate implication is, of course that because the ship has been owned by a series of rough-and-ready smuggler types (Lando and Han that we know of), that the ship's brain is much the same, built using a mixture of official and unofficial parts and periodically using vulgar language which we know C3PO finds offensive.

In the excellent (but not especially canonical) "Millennium Falcon Owner's Manual" we can see the problem more clearly; 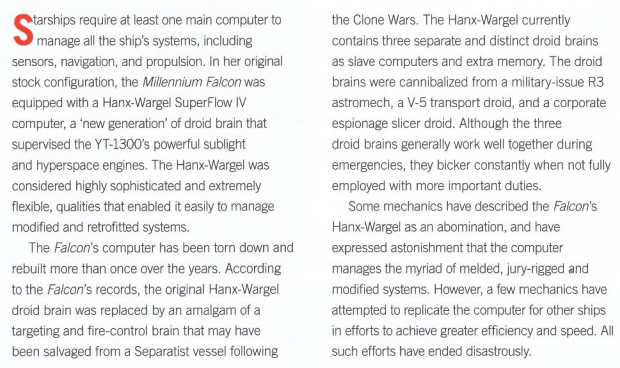 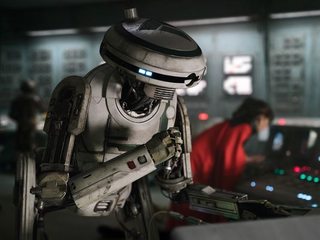 She was damaged in the escape from Kessel (in Solo) and died. Han, Lando, and co. uploaded her core processor into the Falcon so they could use her navigational database to plot a shorter course for their escape.

In the radio drama version of The Empire Strikes Back, Han states that the Millennium Falcon's particularly rude communications is a product of being crewed by himself and Chewbacca.

Beginning at 1:38:00 in the recording linked above:

THREEPIO: Oh dear, oh dear. Where is Artoo when I need him? What an incredible mess!

HAN: How's it going on the hyperdrive Threepio? Fixed yet?

THREEPIO: Captain, I don't know where the Falcon learned to communicate, but she has the most peculiar dialect.

THREEPIO: No, no, she's very intelligent, but she can be so rude at times.

HAN: Well, it comes from hanging around with me and Chewie. You're liable to start doing it yourself. What'd she say?

38
In what adaptation of Return of the Jedi did Jabba brag about killing Jedi in the old days?