I'm trying to track down the title/author of a novel I read some time back. I read the novel sometime between 1998 and 2004; not sure when it was printed. The novel itself I originally found in the YA section at my local library.

The setting of the novel is an interstellar generation ship outbound from earth, several generations into the journey. The plot loosely runs something like this - Several students undergoing what should have been ordinary virtual reality training at school suddenly instead find themselves inside a completely unfamiliar scenario (one which resembles the stereotypical 'you all meet in a bar' RPG intro). As time goes on, not only are the students drawn back into the 'game' simulation, but they actually begin to disappear from the ship itself - they discover that, in order for everything to go back to normal, they have to win the game.

The whole thing was revealed, in the end, to be the result of a set of embedded programs in the ship's master computer, if I recall correctly, with the programs having been placed there by a programmer who realized that the inhabitants of the ship were effectively breeding the spark of creativity and imagination out of themselves. Said programmer had taken it on herself to leave them a legacy that would ensure that, by the time they got where they were going, that all-important spark wouldn't have died completely away. 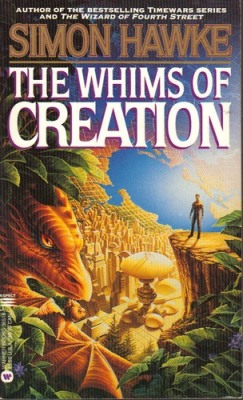 Could be "The Whims of Creation" by Simon Hawke.

From an online review:

The Agamemnon is a generation ship. Ten miles in diameter and even more in length, it carries hundred thousand humans and multiple AIs on a slowship trip to the stars.

It's a dozen generations into the trip by now, and things are working perfectly. Except in the last five years depression's on a major upswing, and there's been almost a dozen suicides.

And now Ulysses, Jenny, and Riley are getting sucked into a new kind of VR sim. And strange creatures are appearing on the decks of the ship. What the heck is going on?

On the Agamemnon strange things are happening. A botanist studying damaged herb plants encounters tiny humanoids with wings. A young woman coming out of a broken relationship is seduced by an elf. A security skimmer has a mid-air collision with a dragon. Three teenagers experience a different virtual reality simulation than the rest of their class.

From this page, an important plot point:

As the baffled, frightened colonists search for answers, a young misfit named Ulysses stumbles upon a clue -- an alternative virtual reality within an interactive cybergame. A place where anything can happen, because the software is alive.

And the reason for these strange events:

All of these elements tie in with an intelligent program set up by a crazy genius during the first generation. She had a plan in mind and it is up to some teenagers, the head of security, a biologist and a professor to determine just what the threat is and how to deal with it.

Not the answer you're looking for? Browse other questions tagged story-identification young-adult generation-ship or ask your own question.

6
Looking for a book set on a generationship
4
80's-90's book with an inter-generational ship, society in despair, mythical creatures appear and kidnap kids for a quest