I remember very little of it, unfortunately, so following details may not actually be correct. It was a rather thick book, bought in the 90's in London. It had two stories in it, and the one I'm interested in involved fighting Boba Fett in a (previously destroyed?) bar. It was set shortly before the original trilogy. You were, naturally, a jedi. It started as you landed on a planet, and if you managed to get killed in the spaceport by annoying the stormtroopers you'd wake up on the ship after a "premonition".

The game part of it was quite advanced, the most complex CYOA system I've seen - with items or clues that were used by adding a number to the current story number, as well as check box event tracker that allowed for different outcomes depending on what's happened. For instance, same story bit about travel could lead you to a bar or its smoldering ruins, depending on whether it has been destroyed or not.

It appears to match neither the official Choose Your Own Adventure books, nor the Game Books. 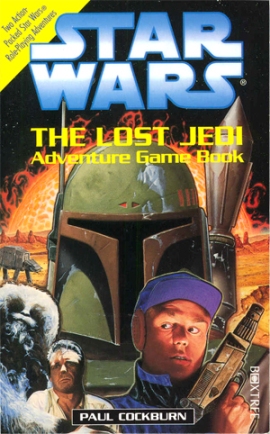 Could be "The Lost Jedi Adventure Game Book" by Paul Cockburn.

The Lost Jedi Adventure Game Book is a ‘choose your own adventure’ style roleplaying story published in 1995 (only in the United Kingdom).

Collecting the individual books ‘Jedi Dawn’ and ‘The Bounty Hunter’, each published in 1993, The Lost Jedi chronicles the adventures of Havet Storm, the lone surviving descendant of slain Jedi Morvet Storm.

An overview of the first story:

Set 0 BBY ‘Jedi Dawn’ sees Havet Storm inherit his grandfather's lightsaber and discover that he has within him the potential to become a Jedi Knight. Running from the Imperial agents that killed his family, Havet arrives on the Planet Toprawa, location of a high security Imperial Research Station. Shortly after arriving on the planet, Storm makes a personal enemy of Boba Fett and becomes embroiled in the Rebel Alliance's attempts to steal the plans to a frightening new imperial Superweapon.

A description of the second part:

Set in 2 ABY, two years after the events of ‘Jedi Dawn’. In ‘The Bounty Hunter’ Havet Storm, now a wanted man, attempts to leave the planet Toprawa, but finds himself once again involved in galactic affairs. Running from the villainous bounty hunter Boba Fett in an attempt to find and warn the smuggler Han Solo of the Empire's nefarious plans - before it's too late.

Not the answer you're looking for? Browse other questions tagged story-identification star-wars choose-your-own-adventure or ask your own question.