Did the World Engine from ‘Man of Steel’ appear in Superman comic books?

Was the concept of a World Engine in "Man of Steel" derived from the Superman comics or invented just for the movie?

This article http://dccinematicuniverse.wikia.com/wiki/World_Engine does not appear to clarify the issue.

While there are no canon reference to a "World Engine" or similar gravity-based terraforming devices anywhere within the Superman canon (strongly suggesting that it was invented purely for the film), there are a number of alternate DC sources to consider; 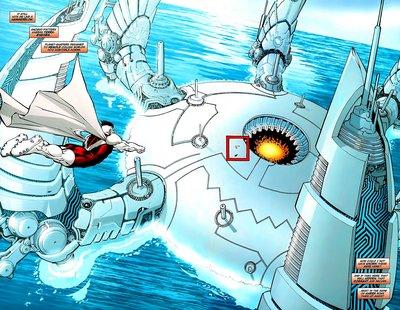 The Planet Shapers were used by a race called the Kherubim to terraform worlds, altering the atmosphere as well as using the DNA of local species to create subservient workers. The machine also uses a central database of pure Kherubim DNA to recreate the original Kherubim race.

The only specific reference I can find to anything called a World Engine is in the comic "Thor : Worldengine" in which a device of 'unimaginable power' is used to trick Yggdrasil, the World Ash into believing that Ragnarok (e.g. the end of the world) has occurred.

Given the dissimilarity between the two devices, my personal feeling is that the name is purely coincidental. 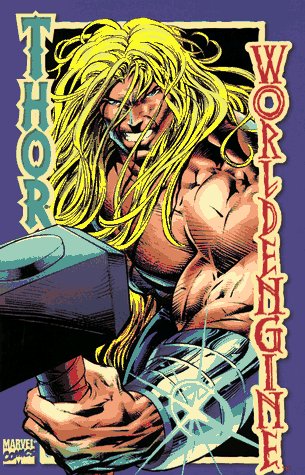 According to the Marvel Wikia;

An eccentric physicist named Price, after ingesting hallucinagens became obsessed with Ragnarok, and what humanity would be like after the world ending in fire. So he created the World engine, which tricked Yggdrasill into believing Ragnarok had already ocurred, and began creating a new race of humans.

"Nursed on nothing but the morning dew" according to Price. The Post-Ragnarok Humans were gestated in sap-filled boughs that grew on Yggdrasil's branches. They were designed to exist in an environment filled with ash, in which they would "eat". Unfortunately, because this atmosphere didn't actually exist, they all began starving to death only moments after being born. 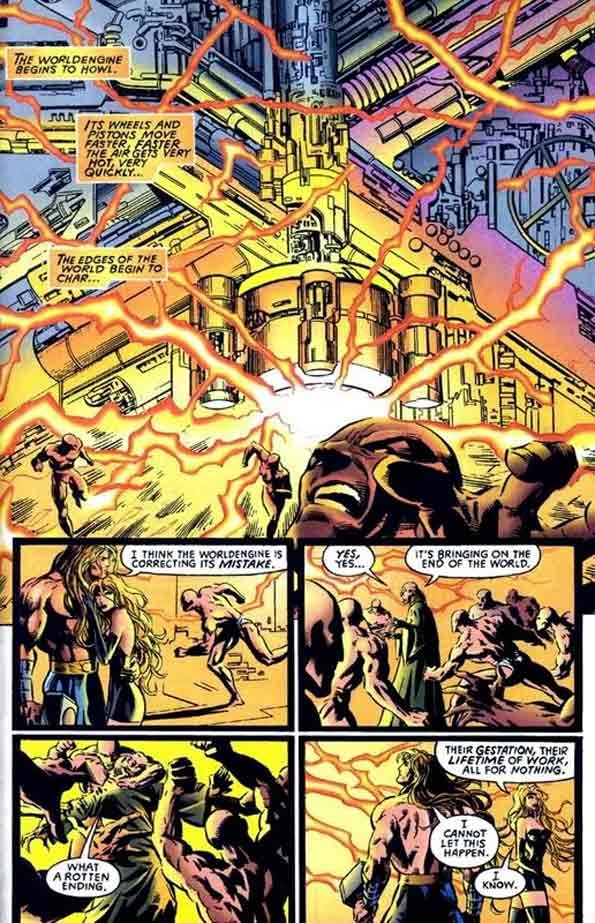 Actually The World Engine exists outside of the Superman movie, just not in the same form. It is featured in the Marvel Universe as a large device that was used to trick Yggdrasil that Ragnarok already happened.

The concept of Superman's World Engine, as a terraforming device, was created specifically for The Man of Steel Movie though. 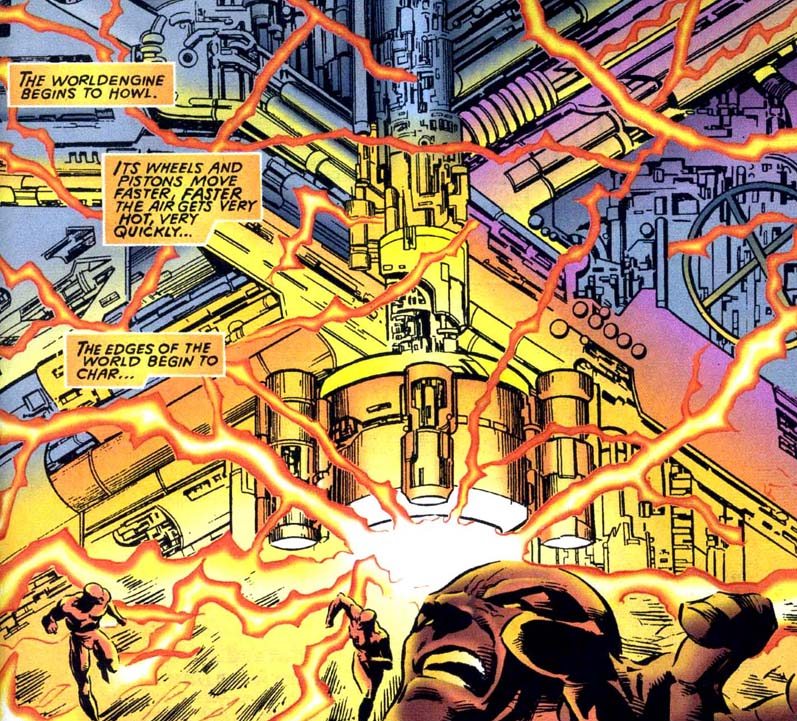 Was the concept of a World Engine in "Man of Steel" derived from the Superman comics or invented just for the movie?

The World Engine is the specific name they gave to the machine that Hamilton in the movie described as terraforming. It's a terraforming machine, a device to change a given planet's environment to suit a specific need. This is an old hat science fiction trope. And in fact, is something that is constantly thought of for real life. NASA and other space agencies have ideas for Terraforming Mars and the Moon, from practical methods like using bioengineered algae to (currently technologically) impossible methods like nanomachines.

While I haven't kept up with Superman or DC comics, the Justice League cartoon had a couple. The very first movie/episode "Secret Invasion" had the Imperium Ion Factories, large Atmosphere changing Smog production generators and Imperium Walkers, tri-pods with large heads. I immediately though of that when the World Engine was shown. (Walker shown, not the Factory, I can't stream the episode to take a screenshot right now). 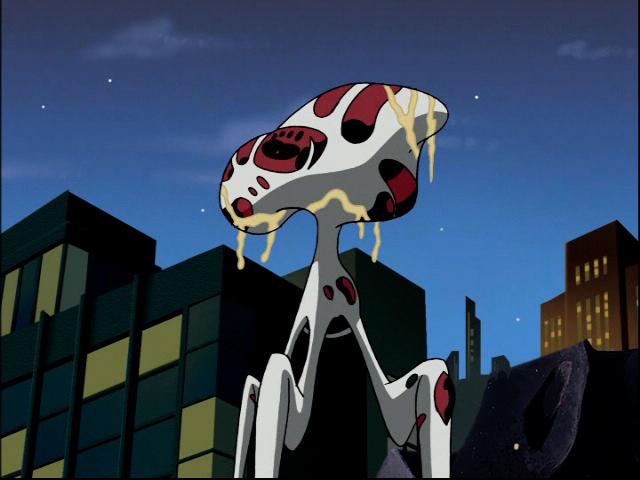 The Dark Heart, more of a self-replicating nanomachine weapon really, is very similar.

"The Man of Steel: Inside The Legendary World of Superman" book is part art-book and part making-of feature which gives some insight into the inspiration for the World Engine. The idea behind it was simply driven by the plot requirements and the back history developed for Krypton and its age of exploration. The filmmakers quite wisely saw space and exploration programs as impetus for technological innovation and proliferation... much as we use everyday technologies originally developed or inspired by our own space program.

With colonization in mind, terraforming was practically a necessity, and therefore the World Engine as a concept was developed. However, the visual appearance of the World Engine (and Black Zero) was driven by essentially three main principles:

The design principle was that most of the technology on Krypton was "grown", thus things like their armor, guns, or restraints all look biological- rather than metallic, shiny, or manufactured. Thus the inspiration came from sources like H.R. Geiger and nature... mollusks, insects, plants, etc.

The second design principle was to create something strikingly different from traditional alien ships, and thus the incredible verticality and tri-pod like appearance of the Zero and World Engine... rather than more traditional horizontal designs.

Lastly, although not expressly stated in the film, most of the technology seen in the film is literally tech from the age of expansion, merely being used, reused, retrofitted, etc... continually passed down through the ages as society and innovation ground to a halt. Thus the interior of the Zero is meant to be dirty and messy compared to the more uncluttered Scout Ship.

In sum, while parallel developments may have been found elsewhere, for the purposes of the film, the World Engine was an original invention for the film, driven by natural principles of plot and design, rather than something borrowed from any comic.

22
How have Superman comics dealt with the Man of Steel, Woman of Kleenex problem?
19
In "Man of Steel", how did Superman get his super-suit?
17
Why aren’t the Kryptonians powerless in their biosuits in Man of Steel?
1
In the Man Of Steel movie where could have the kryptonians gone after being sucked by the black hole?
15
Why has Superman allowed humans to control the Kryptonian ship, Zod's body, and the World Engine wreckage?
11
Wouldn't this sound kill or seriously maim everyone close to Superman?
1
Does having the Codex inside him make Superman stronger in Man of Steel?
7
Was the villain of Superman IV based on a comic character?
6
Was Zod's house symbol in Man of Steel inspired by the one from "Red Son"?