Sixties or Seventies film where there is a flash and lots of the population disappear, leaving behind their clothes. A father and his kids try to make it back to their home to the mother of the family: when they get there her clothes are on the bed (she didn't survive) and the camera swoops out of the window to end on a shot of a sunrise/sunset on the beach. From what I can remember, survivors were protected by a specific gene: in the case of the father, he had the gene and had passed it on to his children, but the mother didn't have the gene. Does anybody know what this film is, as I've been trying to find it for years..... 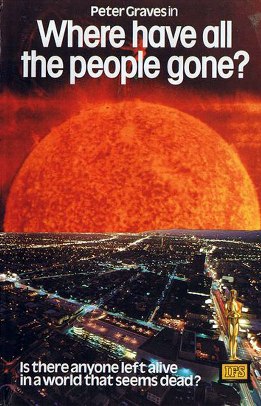 A strange series of solar flares proves fatal for inhabitants of the Earth, except for the fortunate few who are somehow immune from the effects. Animals go insane and human beings turn to white powder, leaving behind only empty clothing. A handful of survivors attempt to rebuild their lives on the de-populated Earth.

One reviewer talks about the film's climactic scenes:

They [Steven and the kids] get one of the cars in the parking lot to run, and drive to L.A. There, they find that mom turned to powder too.

She left notes describing how the massive solar flare must have mutated a deadly virus. Only those with the right genes survived.

Read more about the movie here and here.

4
TV episode where family survives explosion in cave, everything else dead