Why were they eating bowls of snot?

In The Matrix the crew of Nebuchadnezzar was shown consuming a singularly unappetizing gruel that one member succinctly described as a "bowl of snot."

These people had high levels of mechanical and computer technology, and they had agriculture or at least horticulture. Methods of preserving perishable foods for long voyages were centuries old. Even during the time of Columbus no sailor ate this badly; they likely would have turned to cannibalism and fell upon each other before consuming such disgusting fare. Early astronauts ate pureed foods, but today's spacers eat the rough equivalent of the microwave nukable food we eat down here.

There is a food reminiscent of the Nebuchadnezzar porridge, it's called "the loaf", a bland unappetizing food slab served in prisons as a disciplinary measure. 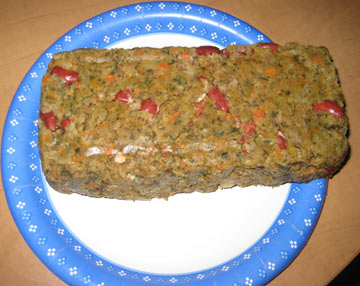 Despite the loaf containing "all the vitamins and nutrients and minerals that a human being needs," inmates have sued U.S. states claiming that being forced to eat the loaf is cruel and unusual punishment.

The Nebuchadnezzar crew were not prisoners. They were free men and women voluntarily taking on dangerous missions who did not need the additional psychological battery of being faced with unappetizing slime at mealtimes. Humans newly freed from the Matrix surely did not need such an additional shock.

Why was Nebuchadnezzar's crew eating such bad food?

Dozer makes it clear that the ship is a military vessel on a long-term mission. The 'snot' contains everything the Nebuchadnezzar's crew should have in order to sustain their health;

"synthetic aminos, vitamins, and minerals. Everything the body needs".

It's not universally disliked :

Both Tank and Mouse seem to rather like it. Tank describes it as "The breakfast of champions" and mouse says that it tastes a bit like "Tastee Wheat".

The crew can have whatever food they want, whenever they want it:

It's clear from the Matrix films and Animatrix that the crew are able to use The Construct to simulate certain environments, for sparring/training and also to have virtual sex. I think we can reasonably assume that they can also simulate the finest foods and drinks known to man.

Operation Dark Storm resulted in the sky becoming darkened. Growing crops above the surface is not going to work due to the likelihood of machine attack and the energy required for hydroponics is prohibitive.

They don't have any seeds;

For me, this is the absolute killer:

In the webcomic The Miller's Tale (from the original whatisthematrix website) we see the difficulties of growing real crops, both because of the power requirement and space requirement. At the end they lose access to seeds and the seed-bank which means that they can only grow cultured protein or make bread from their existing stocks of wheat. 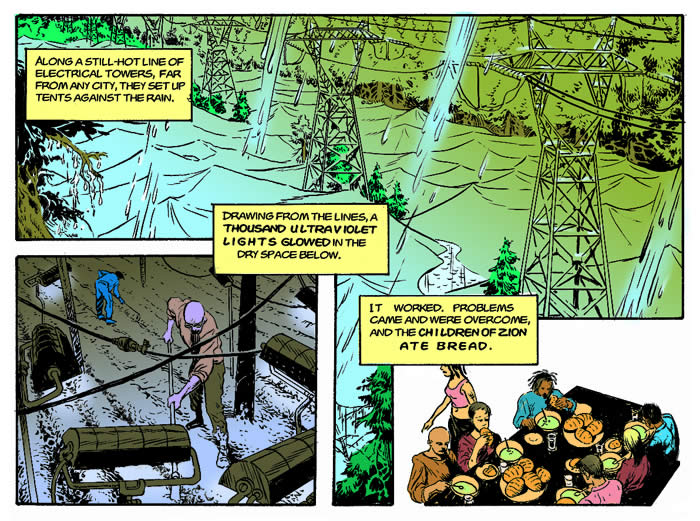 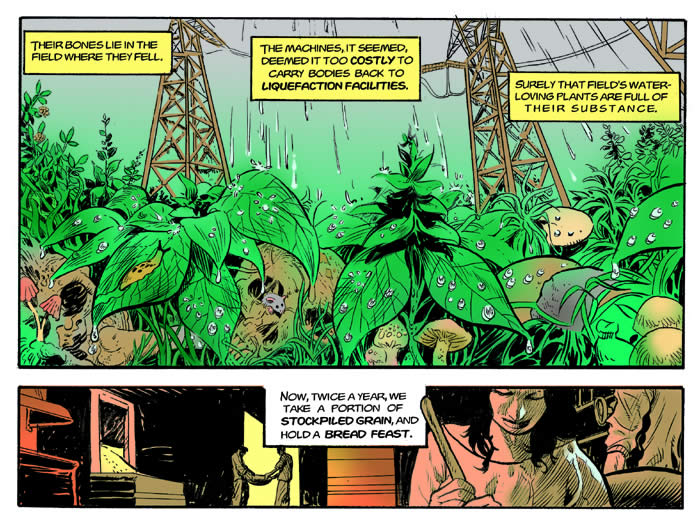 Heck, it's better than the alternative:

In the script notes section of The Art of the Matrix, Phil Osterhoose (Assistant to the Wachowski Brothers) tells us what it was going to be:

Scene 72 - Tastee Wheat : The food in this scene was originally cockroach. No one tells Neo what it is.

MORPHEUS : Sit down Neo. Let's get you something to eat.

Piled onto plates are pieces of a large black-shelled creature, Everyone begins grabbing and cracking open shells, pulling out the meat and dipping it into bowl of butter-flavored topping.

BUZZ : So, Neo, how'd you like the orientation program?

He sucks at a long piece that looks a lot like a crab leg.

[BUZZ] leans close, licking the artificial butter from his lips. Jazz hands him a piece of white meat. Neo dips and eats it.

JAZZ : You're going to learn Neo, there are some questions you don't want to know the answers to.

Suddenly the lights dim and Tank, who left for a moment, returns carrying a small fruit cake with a single candle on it.

MORPHEUS : Here's a little something we do, Neo, to celebrate your first day out.

Here is the follow up quote regarding the "bowl of snot":

He puts a bowl of it down in front of Neo, who just stares at it.

Mouse : If you close your eyes, it almost feels like you're eating runny eggs.

Dozer : It's a single celled protein combined with synthetic aminos, vitamins, and minerals. Everything the body needs.

Firstly, it likely to be a sarcastic quote. But also, given that the crews on the hovercrafts needed to be self-sufficient, procuring their own food was important. Plus, with the sun being blocked out traditional farming would have been difficult.

Much like the Matrix is for the machines, humans would have had algal farms either on the ships or at least readily accessible, that pumped out this goop to provide the most direct energy-to-food plant.

As others have said, the lack of sunlight on the surface (as well as the ease of which the machines could attack above-ground human settlements, which is why Zion is subterraneous in the first place) rules out any natural, above-ground farms. As to why there are no apparent farms lit artificially in Zion, space constraints are the likely reason. Farming wheat, carrots, onions, etc on the scale required to feed a large populace requires quite a bit of space and water.

Despite the difficulty in keeping a self-sustaining farm in the confined space of Zion, with it's limited resources, I suspect they do have some sort of array of crops. The most likely candidate would be hydroponics grown crops, as they would not require viable soil (most of the topsoil on Earth has likely been corrupted by the machines, as a result of the massive pollution their civilization would incidentally release, which they would have no motivation to limit), and would also not require crop-rotation (which would be difficult with Zion's space constraints). It is likely that their selection of crops to grow is limited however, I doubt that when humanity fled the surface of the Earth it was able to bring a large quantity of seeds from every type of plant crop (though whichever government effort led to the inception of Zion probably planned supplies of plant seeds as well).

Regardless of the method of which Zion grows crops in theory, it is very unlikely that Zion only eats the "single celled protein combined with synthetic aminos, vitamins, and minerals" porridge, as I would point out that although the amino acids, vitamins, and minerals are said to be synthetic, that does not mean they magically appear out of a machine with no source. Unless they literally have technology that takes raw elements (Copper, Hydrogen, Carbon, etc) themselves and forms them into larger biological components (something that I've not heard of being feasible even today, and if it is, it would most definitely be terribly inefficient), it's likely that they are extracted from food products.

It's easier to specifically answer why the crew of the Nebuchadnezzar and other human ships had to eat the "bowls of snot". Where it is challenging to produce a sustainable farm in Zion itself, it is even more so in the limited space of the ships, who also do not have access to large, replenishable sources of water. In reality, NASA has experimented with self-sustaining hydroponics on it's shuttles, but they are not close to being primary food sources, and are more a novelty to study at the moment. Even if the Nebuchadnezzar could house a hydroponics bay large enough to feed the crew for voyages that could be weeks to months long, it would be very vulnerable to disruption. Think about how frequently the Nebuchadnezzar is forced to stop and shut down all power for several hours (and possibly a few days in the rare occasion that there's a buildup of drones in the area). During that time, the water aerators would not be oxygenating the water nor would the temperature be maintained at the level required for the plants. And even if they somehow had more resilient hydroponics technology, what if the very real possibility of the Nebuchadnezzar being scuttled by it's own EMP, or even a simple malfunction, came to happen? The hydroponics bay would most definitely fail within days (and refrigeration of any crops would fail).

As such, keeping a colony of simple single-celled organisms is an ideal substitute for crops on ships. Such a colony would only require that the temperature not make extreme fluctuations, that water levels are kept constant, and depending on the organism, that sugar or starch (or even alcohol, some species of yeast can metabolize alcohol under less ideal conditions) be regularly provided. Reliance on electricity would be minimal to none at all. Interestingly, the "snot" produced on the Nebuchadnezzar is evidence that humans have crops somewhere (in Zion), as their single celled colony still requires food from some source. This indicates that they possibly grow beets, or sugar cane, or some good source of sugar or starch, as either would be needed to support the "snot colonies" on ships.

While the science of the Matrix tends to be embarrassingly wrong, Lego Stormtrooper's quote about single celled proteins being a case in point, this one actually makes sense. Part of the premise of the story is that the sun has been blocked: 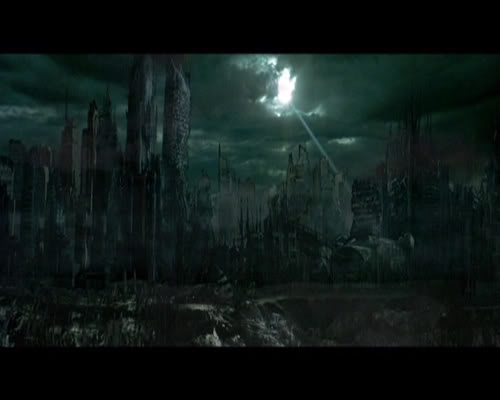 Given the success of Operation Dark Storm, the sun has effectively been blocked making it impossible to cultivate food on the surface of the planet. This is the only in-universe explanation you are likely to find.

As for why a culture with the technology to generate EMP pulses at will could not set up an indoor hydroponics lab or simply hang a light over a wheat plant, your guess is as good as mine.

As one who works with machines that have to act like a computer, but be constrained by battery, I'd hypothesize that the constraining factor is space on board the ship; it would enhance mobility by many vectors if the food was produced as-needed. Of course, there may have been a scene in the last two movies where they were re-stocking the ship that disproves this but I didn't catch b/c I was getting recklessly drunk by the first half hour.

46
Was executive meddling the cause of "humans as batteries" in The Matrix?

11
How did the land line phone exits work in the Matrix? How did they get from the line they jacked into to the line they jacked out of?
25
In the first Matrix film, why did they free Cypher in the first place?
36
Why do they need "16 female, 7 male" to re-establish Zion?
6
If Morpheus and Neo were driven by free will, why did they follow the Oracle's advice?
28
Why don’t humans back up their minds when they enter the Matrix?
20
Why did Cypher say they were going to kill Neo?
9
How can they hack the Matrix, wirelessly?
14
If in the Matrix the characters could do whatever they want, could they be someone else?
25
What would be the choice given to Neo's five predecessors when they were in the Architect's room?
14
What is the significance of Neo eating the Oracle's cookie?