This book is about a man who was once a powerful general in a space fleet. When he disobeys his President (who is female) she has him assigned to a planetary constellation that has no apparent value.

There he makes some friends and starts planning a revolution, his trump card being a valuable mineral used to chart pathways in space. The universe was running low on this mineral but his backwater constellation had a planet stuffed with this resource.

Added to the mix were awesome political agendas and an alien race thought to be extinct.

Please can someone help? 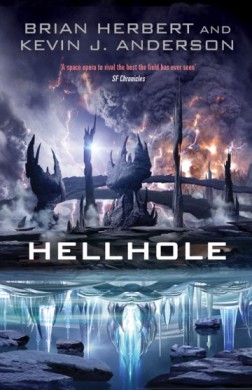 Could be "Hellhole" by Brian Herbert and Kevin J. Anderson

Taken from a review:

General Tiber Adolphus has been exiled to the Deep Zone planet of Hallholme, after his failed attempt at overthrowing the Diadem Michella Duchenet and the corrupt Constellation government. Hallholme is a planet in constant chaos and harsh conditions, the effects of an asteroid impact centuries ago.

During his ten years in exile, Adolphus has been planning for the day he can declare independence from the Constellation.

Another section talks about the rare mineral/substance:

With the discovery on the [allied] planet Candela of iperion, a molecule that can be processed to help guide faster-than-light traveling spaceships, he has been able to set up his own network of travel, with Hellhole as the initial hub.

How they stumble upon the ancient aliens:

Pools of oily water are discovered that store the collective memories of the alien race that lived on Hellhole before the asteroid destroyed the planet.

The Xayan race dissolved their bodies in the slickwater so that their memories could go on and so that the next life forms that came along might take on the personalities saved in the pools.

It's part of a trilogy. The second and third (as yet unpubished) books in the series are "Hellhole: Awakening" and "Hellhole: Inferno".

Not the answer you're looking for? Browse other questions tagged story-identification hard-sci-fi brian-herbert or ask your own question.

6
80's 90's female protagonist descending in a space elevator or a tall tree on another planet
7
space race retracing a legendary artist's life
8
Very short science fiction movie where clones are revived in a space ship, make observations and then die
9
Story about Angels in Revolution-era United States
8
Novel about revolution on a lost colony
11
Book about young girl who ends up in space after apocalypse
15
Revolution against a caste of glowing religious leaders
10
This book about space/interstellar travel, permafrost, biological androids and mind meld technology, identify
20
Space vampires and bounty hunters