Why is Tasha Yar's hologram semi-transparent?

In the episode Skin of Evil, at the end, Tasha Yar has a farewell hologram prepared for when she died. I know all of this was set in the Holodeck, but why is Yar's hologram semi-transparent, and confined to the apparent projector? The only reason I can think of is that it was to be sensitive to people at the time, making her projection seem somewhat surreal. Is this the most likely reason, or is there something else?

It is a memorial and a (relatively) static image, as opposed to an interactive holographic display. Obviously, the Holodeck could create a fully-realistic hologram of Tasha Yar. Deep Space Nine has show us that this could be incredibly realistic, if the holodeck had the right data.

That said, her being transparent must have been a decision.

It seems that having static holograms be transparent is the common style of the time, as seen in Measure of a Man: 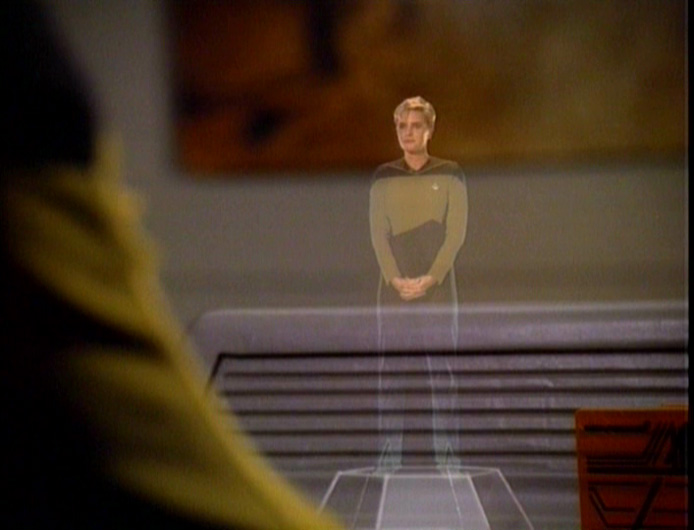 It's likely that Yar's hologram would be non-opaque even if that weren't the style, though, at least for her funeral/memorial service.

A memorial is a time both to grieve for a lost friend or family member as well as to celebrate the life they lived. If the hologram were photo-realistic, opaque, etc it would have been injurious to many people. The sight of seeing Yar standing there, apparently healthy and happy would have reopened the emotional wounds. Even if you're used to seeing lifelike holograms, your gut reaction to seeing one is to see it as a person, unless it is obviously not. Walking into the Holodeck and seeing, even if for an instant, your lost comrade alive and well again would be like a punch in the gut.

TL;DR: It's both the common style for non-interactive holograms and a measure of harm prevention for the mourners.

I suspect the answer is much simpler: "that is what the writers or director thought a funeral message would be like" : make her semi transparent like a ghost.

Not the answer you're looking for? Browse other questions tagged star-trek star-trek-tng holodeck or ask your own question.

48
How did Tasha Yar know that she needed to make a hologram?
11
Did Data and Tasha Yar's 'relationship' continue after the polywater incident?
7
Was Ishara actually Tasha Yar's sister?
7
Did Tasha Yar bring Spot?
4
When did the character name 'Tanya Hernandez' change to 'Tasha Yar'?
12
Was Tasha Yar really executed on Romulus?
15
What happens to replicated food eaten by a hologram?
4
How did Counselor Troi trick Tasha Yar?
2
Why does Troi not tell people about Lutan's desire for Tasha?