In which episode are there two Doctors at a time?

I have seen pictures of the 10th and 11th Doctor at the same time. Is that possible and, if so, could you tell me in which episode it happens?

As the Doctor is a time traveller he does indeed meet himself every so often (often, by coincidence, in anniversary and Christmas episodes). I believe the episode you're referring to is "The Day of the Doctor" which recently aired with Doctors 10 and 11 as well as the "War Doctor".

This however is not an uncommon premise. There have been quite a few episodes which contain more than one doctor (usually anniversary episodes). The most famous of these have been "The Three Doctors" and "The Five Doctors".

In addition there was an episode called "The Next Doctor" in which we were led to believe we'd met Doctor 11 (this was before Matt Smith had been announced).

Finally all 13 appear (some via TV trickery) in "The Time of the Doctor".

You can see a complete list of multi-doctor stories here. 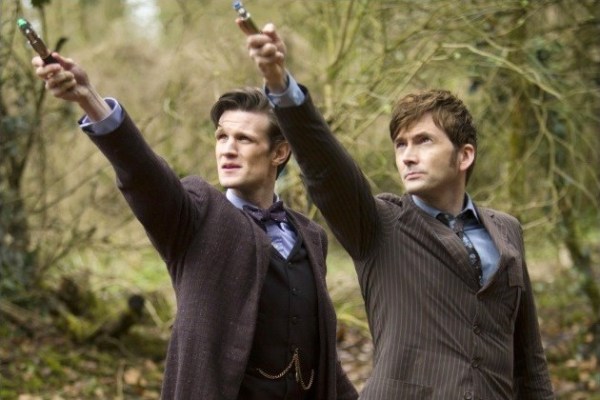 There is a mini episode known as "Time Crash" (Charity special for Children in Need) after the episode "Last of the Time Lords" in which The Tenth Doctor and The Fifth Doctor interact with each other inside of the TARDIS.

At the end of the episode, Last of the Time Lords, Martha leaves the 10th Doctor and when he begins to leave, there's a collision in which the Tenth Doctor's TARDIS crashes into the Fifth Doctor's TARDIS and as the Tenth Doctor is trying to check the controls, he passes the Fifth incarnation of himself also trying to check the controls of this TARDIS.

An alarm goes off, the Fifth Doctor realizes that there was a Temporal Collision - two TARDIS's crashing together; however, he only believes there to be one TARDIS. He comments that this is a paradox with two TARDIS. The Fifth Doctor continues to believe the Tenth doctor as his "biggest fan" despite the fact that the Tenth Doctor shows him the sonic screw driver and tells him that they are the same.

The Tenth Doctor counters the paradox ( two copies of the TARDIS) with a supernova, a solution he remembers seeing himself perform in this same incident ( which is a predestination paradox). The Fifth Doctor then realizes that they are the same.

It is a great moment because the Fifth Doctor is the Tenth Doctor's favorite Doctor.

You know, I loved being you. Back when I first started, at the very beginning, I was always trying to be old and grumpy and important—like you do, when you're young. And then I was you, and it was all dashing about and playing cricket and my voice going all squeaky when I shouted. I still do that, the voice thing, I got that from you. Oh, and the trainers. And... snap! 'Cause you know what, Doctor? You were my Doctor.

The Fifth Doctor fades away, reminding the Tenth Doctor to "Put his shields up" right when the Titanic crashes into the TARDIS setting up the next episode, "Voyage of the Damned."

You can read more about it here: "Time Crash" or watch it below

'The day of the doctor' special, actually this special had 3 actors who played the doctor excluding john hurt because he was retro added due to ecclesons static with the show. The three were Tennant, Smith and Baker

28
Doesn't the Doctor Who episode Blink have a paradox?
21
Are there any classic Doctor Who episodes featuring the Last Great Time War?
17
Has The Doctor always had shaky driving skills, or has he become a better driver in his 12/13th incarnation?
4
In which Voyager episode did the Doctor have sexual relations?
11
How did the 10th Doctor recognize his 11th incarnation as his future self?
4
How did memory work in Old Who multi-Doctor stories?
5
What are the superpowers of The Doctor other than Regeneration?
11
In which episode of Doctor Who is the Tardis a Red Police Box and is there a significance for it?