How did Smith get out of the Matrix?

At the end of The Matrix Reloaded and throughout The Matrix Revolutions, Smith is an actual human being outside of the Matrix. How did this happen?

Note: the question of why Smith didn't die at the end of the first movie is discussed here, but I am asking how did Smith get out of the Matrix and into a real body (so to speak)?

It's not explained. We've got a few choices though...

This one seems the least plausible; Smith has somehow managed to overwrite Bane's brain and implant his own memories and consciousness upon Bane's, in much the same way that the Agents overwrite bluepill humans inside the Matrix.

Obviously this opens up many unanswered questions but we do have the two canon examples such as the Steak Scene from the original Matrix film ("I don't wanna remember nothing") and from the Matrix webcomic "Goliath" where we see that the machines have the ability to edit memory. Presumably this control of memory would give them the ability to rewrite someone's mind that was jacked in.

Bane, like all Matrix-born humans has ports implanted directly into his brain and body. We see Keanu interacting with the Sentinels while disconnected from the Matrix so presumably these ports have both wireless capability and some form of power source. It's not a great leap to imagine that they also have sufficient computing capacity to carry a copy of Smith's personality and that he's basically turned Bane into a meat puppet 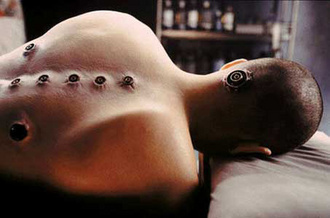 This explanation also goes some way to explaining how blind Keanu can 'see' Bane as Smith during their iconic fight.

They're all still in the Matrix. Just on a higher level (MWAM)

Since we see Agents moving freely into humans inside the Matrix, if we imagine that Morpheus' "desert of the real" is in fact simply another Matrix, it then makes perfect sense that Smith can move freely into a redpill human as they do into bluepill humans in a lower level of the Matrix.

This one is obviously the least likely as the MWAM theory seems to have been debunked.

Smith had become uber powerful at that point and was beyond the control of even the machines. He'd gained the ability to take over other programs and to manipulate the Matrix and break its rules in a manner similar to how Neo could.

Part of the premise of The Matrix is that the human mind could interface with a digital computer. Sensory data could be perfectly simulated and fed directly to the brain. Similarly, human neural impulses could be fed into the machine and interpreted/understood by the software. This interface is so advanced, that dying in the Matrix would result in the body dying (likewise with certain injuries in the Matrix).

The Wachowski siblings were also heavily influenced by other sci-fi works, including Ghost in the Shell, in which electronically augmented brains could be hacked into, allowing the individual's memories to be manipulated or even be temporarily taken control of remotely.

The world of The Matrix likely has similar dynamics. Smith would be akin to a "super-class-A hacker" capable of actually overwriting the personality of a human if he infects them as they're exiting the Matrix and returning to their physical body. Since the link is a two-way street, it seems plausible that an AI program could project its consciousness into a brain just as a brain can project its consciousness into the Matrix.

However, I have no idea why Bane happens to look exactly like Smith. I guess it was just dumb luck?

Once connected to the matrix, the residual self image was the representation of the personality of the hacker hooked up into it. Consider it similar to an online profile you create. What Smith did was, he overwrote this online profile. He copied himself onto the personality of Bane. It is very similar to overwriting the contents of a file with new content. If Hackers could project their personas into the matrix, it is fairly conceivable that a program could overwrite this virtual persona. So Agent Smith didn't get out in a physical form, but he took over the personality of another human hooked up to the Matrix.

It is explained through the course of the second and third movie that Smith has evolved or turned into a self aware program, able to rewrite his own code, so he can do things that the other agent programs cannot do. One of the things that he can do is overwrite or imprint onto other programs.

When a person is plugged into the matrix they are in a sense "running" their program in the matrix, in order to get back out, they need to download(upload) the changes made to the program back to the source code.

So, Smith made changes to the Bane program and then had it uploaded to the Source.

I don't believe that the Smith Program could communicate with (Smith)Bane while he was not plugged into the Matrix, so that tells me that Smith Copied his program onto the blank slate of Bane's existence. (for those of you who disagree please answer Was (Smith)Bane able to communicate with Smith?)

From what we see when Smith copies himself over, it appears that they turn black from the point of entry as they are being erased and then the Smith program is copied over. or you could look at it as the black is the process of overwriting the existing program.

So I would say that Smith(Original Program) never left the matrix himself.

If you look at a human brain as a computer, like a hard drive, it can hold information and data just like a regular computer: you can edit files and can format memory. So then you would be able to edit memories and personalities.

Mr. Smith took over Bane right as the phone rang for him to be able to leave the Matrix so Mr. Smith, now in bane, just picked up the phone and was downloaded into Bane's actual brain just like we download viruses onto our computer and the virus will edit our files and change whatever it was programmed to do!

So in a quick summary: Mr. Smith acting like a computer virus infected Bane in the Matrix, then when the phone rang it opened up a link between Bane in the Matrix and Bane's real brain. Since Bane was hardwired into the matrix, it was easy to download himself to Bane's actual brain as if Bane's brain was just another computer connected to a network at home or work! Since Bane was not hardwired to anyone else in the real world, he could not infect anyone else unless he was hardwired to them!

If you have ever had a virus infect your computer, you know its not the same computer you had: it now acts differently, like its a whole different machine when in fact it basically is because it edits the files like the files in our brain that makes us us. Now the virus is making the files that make us and the computer do what it normally would do stop and now it is doing something else, what the virus wants! What Mr. Smith wants!

It's not hard to think that smith wouldn't be able to do something to banes brain outside the matrix while he overwrit him in the matrix, he could have sent some sort of electrical shock to his brain, like brainwashing, or it could be that he erased banes mind and used said tampering to copy himself into it

89
Why Did the Machines Even Bother With a Matrix?
24
Why didn't Agent Smith just die?
5
Does the machine intelligence reboot our genuine knowledge of A.I.?
4
Was (Smith)Bane communicating with Smith?

89
Why Did the Machines Even Bother With a Matrix?
9
Matrix Reloaded - How did the message from the Oracle get out of the Matrix?
30
How did Neo destroy Smith in The Matrix Revolutions?
19
Did Agent Smith have the power to fulfill Cypher's wish?
8
Relationship of illness outside the Matrix to illness inside the Matrix
9
How was the virus Smith able to get back into the Matrix without the Trainman's help?
5
Where do programs that leave The Matrix go?
10
Did the Oracle corrupt Agent Smith?
10
Why did Smith have to absorb Neo at the end of the trilogy?