Can magic be used to transform a muggle into a witch/wizard? (HP universe) [closed]

Ask Question
Asked 8 years, 6 months ago
Modified 9 months ago
Viewed 8k times
12
Closed. This question is opinion-based. It is not currently accepting answers.

Could a very accomplished witch/wizard cast any number of spells or charms to give a muggle some amount of magical powers? Could it be even theoretically possible?

TL;DR version: The magical gene is passed on from generation to generation; in purebloods it will always be passed on in full or as a Squib; if it is produced in a Squib, then that Squib's great-great-great x4 grandchildren will randomly get the magical gene. As a result, even Muggleborns are distantly related to Purebloods.

In the Deathly Hallows, it is explicitly stated that magic cannot be transferred or created within a person who was born without the magic 'gene', as it were:

ŌĆ£I know,ŌĆØ said Lupin. ŌĆ£Nevertheless, unless you can prove that you have at least one close Wizarding relative, you are now deemed to have obtained your magical power illegally and must suffer the punishment.ŌĆØ

Following the rules of genetic inheritance, we can ascertain that this is a likely sequence for the passing of the 'gene' for magic (please note, there is a minor error - Halfblood Traibortina is actually a Muggleborn): 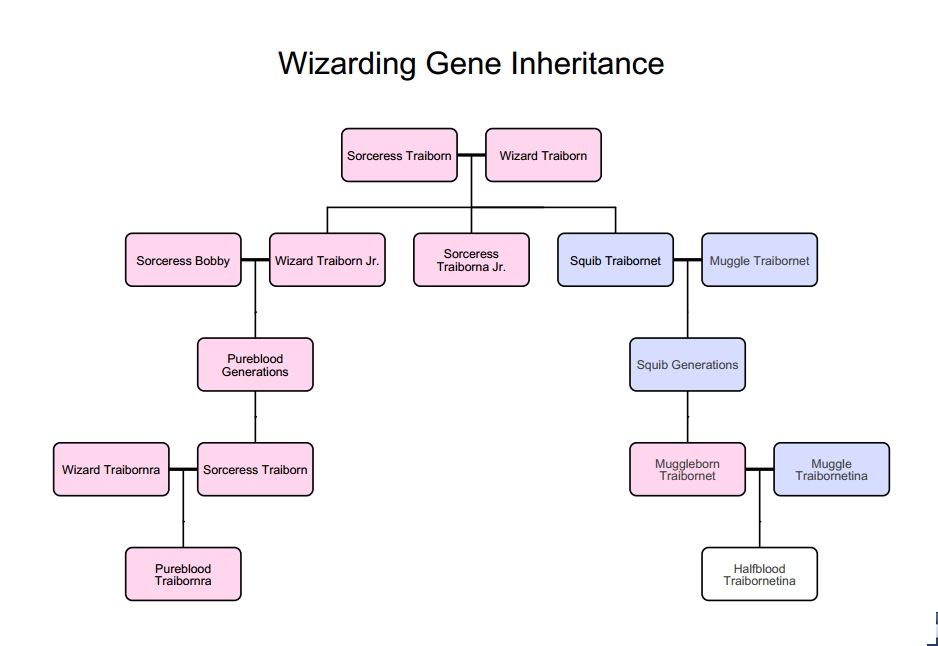 This doesn't line up perfectly (or at all, really) with genetic rules, but we can see that magic recedes and dominates over generations - much like blood types.

In this example, Sorceress and Wizard Traiborn both are purebloods, and produce two pureblood children, but owing to a mutation, produce a third squib child.

This squib has the magical gene, but it will surface randomly over many generations. The squib marries a Muggle, and they create a prospering Muggle dynasty.

Meanwhile, Wizard Traiborn Jr marries Sorceress Bobby, and as they are both purebloods, produce only pureblood children.

Randomly and inexplicably, the magic gene "resurfaces" in Muggleborn Traibornet.

No. In Book 7, Harry says that if people could steal magical powers, no one would be a squib. This is when talking about the Muggle born registry. Therefore, people cannot steal or obtain magical powers without being born with them.

The later books make it clear that it's impossible, but I guess a Muggle/Squib could acquire temporary magic powers due to blood transfusion if you look at the first book, where it's said that the Muggles were so because of absence of magical blood in their veins.

14
How does Anton outwit Kostya?
3
Can a Muggle use magical objects (potion, Time-Turner, etc)?

41
Do "wizard-born" individuals exist (legally speaking) in the Muggle world?
27
What if the parents of a Muggle-born witch or wizard refuse to let them attend Hogwarts?
7
Can a wizard make a muggle into a Horcrux?And will it give magical powers to the muggle?
7
In Harry Potter, what kind of home life do those born to a wizard and a Muggle have?