Why does the EMH use the computer?

I've started watching Voyager, finally, and I've noticed on more than one occasion, we see the Emergency Medical Holographic program (The Doctor) sitting at the desk in sickbay, working on the computer. In "Phage", he even makes a comment about having a lot of paperwork to do. Why? He is the computer, essentially. He could have a direct "mental" link to medical records, as well as medical references.

The only reason that comes to mind is that it's to make him seem more human. But that rationale only would make sense if he were intended to become a part of the crew. This happens on Voyager, but the EMH was intended to be a short-term emergency replacement. Building simulations of writing paperwork seems like a waste of both programmer effort and time that would be better spent during an emergency.

Is there another reason? Is this ever explained?

Because The Doctor is performing tasks humans would normally handle

Remember that The Doctor is in a fairly unique position for an EMH:

Most notably The Doctor, a Mark I serving on the USS Voyager, ran almost continuously for years and was forced to expand his programming extensively to keep up. This EMH originally objected to being the replacement for the entire medical staff...

He's not meant to be a virtual medbay, his functions were intended to be an emergency pair of hands in case a human physician is no longer available. 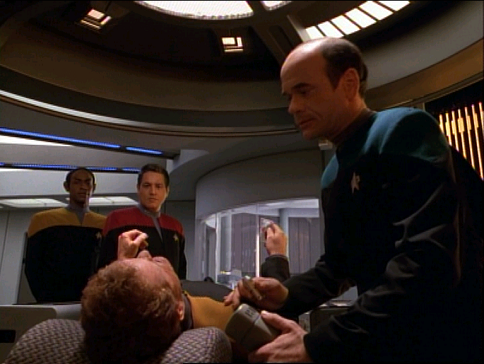 And let's remember that the Mark I was apparently not even that great at doing that job:

Eventually it was concluded that the EMH Mark I was defective, and they were bounced out of the medical corps. While an ashamed Dr. Zimmerman tried to have them decommissioned, Starfleet reassigned them to scrub plasma conduits on waste transfer barges. Later the Mark I's were also deployed in other menial tasks, like dilithium mining.

Same source, but I think it comes from "Life Line". Although The Doctor obviously beats these expectations. It's probably better to think of The Doctor as a med droid with bedside manner than a holographic interface into the Ship's computer itself.

He either uses the computer because it's a 'goof' in the series which the writers' never noticed, or, the doctor's running (he is software) on a different part of the computer system which does not allow him to inter-operate between parts of the system which are not strictly related to projecting his image.

The only problem with this - and it's not a tech issue, but, more of a visual, i.e., story issue, is that it wouldn't really require him to do/need anyone else's assistance, input, interaction, as all his (medical) needs would be 'done' for him, and that's not much of a help on a TV series.

61
Why does Data have to use a computer in Star Trek?
9
Why do the Borg have physical computer interfaces?

4
Why do the people of the holodeck call the EMH Lord Schweitzer?
12
EMH reciting pi
10
Why did the EMH never take on a name?
39
Why does The EMH Doctor feel emotion, but Data does not?
7
Does the EMH have a sense of smell?
20
Why did Captain Janeway feel that using the Doctor as an expendable messenger boy was more important than keeping him around to heal the crew?
1
How does the EMH get into the "system"?
5
Does the EMH ever laugh?
21
How does the EMH see?
11
Why is the EMH in Voyager so much more human-like than Data?