Did JK Rowling originally plan to pair Fred and Hermione?

I read somewhere that at one point JK Rowling had planned to pair Fred Weasley with Hermione Granger, but then changed her mind. Supposedly, she said this in an interview. However, I can't find any citations for this. Is there any evidence or is this just an urban myth?

I've managed to trace the genesis of the 'Fred and Hermione' rumour down to a posting on the 'HP Facts' Pinterest site. Fact #209 has been reposted approximately 20,000 times on Pinterest and many more times on Twitter and Facebook. It appears to be merely a fan-theory, like many of the other spurious "facts" on the now defunct website. 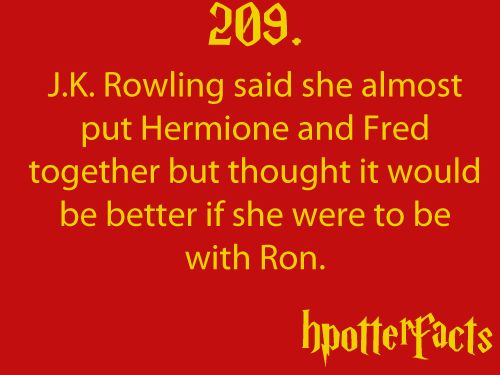 Okay in The interview with JK Rowling, she said that MAYBE Harry and Hermione would have made the better pair, she and Emma Watson were talking of the Harry and Hermione romance as hypothetical discussion. And yes JK Rowling did say Ron and Hermione would most likely need couple counseling, however that they would turn out fine (again in a jesting tone). JK Rowling also said that Ron and Hermione need each other to balance the other out, she to make him less insecure, and her to be less uptight and critical. And to answer your question about Fred and Hermione I read in an interview that she had always intended to pair Hermione with Ron, and that she had always intended to have Fred die at some point, however we can always ship. And believe me guys Fred and Hermione are my all time favorite ship in the series. :)

31
When did J.K. Rowling decide to make Ron and Hermione a couple?

34
Why would Mrs. Weasley believe Daily Prophet's Skeeter about Hermione?
6
Fred's or George's transfiguration skill
11
What did Ron tell Malfoy to do?
71
Why weren't Fred and George Weasley Placed in Ravenclaw?
3
Could Hermione change her skin colour?
6
What happened to Rita Skeeter between Order of the Phoenix and Half-Blood Prince?
25
Does Umbridge's speech really say that "the Ministry's interfering at Hogwarts"?
31
When did J.K. Rowling decide to make Ron and Hermione a couple?
2
Did Hermione use Love Potion on Viktor Krum?