Outside of Order 66, does a blaster ever beat a lightsaber?

There is a scene in The Clone Wars where Ahsoka is in the middle of hallway, deflecting blaster fire from two directions while carrying on a conversation ("Cargo of Doom", I think) and it got me wondering...

In the original trilogy, lightsabers are mostly used for dueling - but we see Luke successfully ward off blaster fire with 100% success (amended: see Kyle Jones' answer... nearly 100%). He never gets hit.

In The Clone Wars, there are many examples like Ahsoka's where the Jedi are defending against an amazing amount of blaster fire. Often from multiple angles. Usually while talking.

But in the prequels, we see the defense effective - with the notable exception being when Sidious starts speed dialing Clone Troopers to murder Jedi:

Obi Wan and Yoda make dramatic escapes. We basically see one lone nameless Jedi get gunned down in what looks like a fair fight. While conjecture might assume there were many more... what we see onscreen is that the best chance you have to beat a Jedi that is ready and armed with a lightsaber is to bring a cannon.

Are there other notable times when a blaster beats a lightsaber?

Luke was shot in his artificial hand in Return of the Jedi, so forget about 100% success.

At the time he was shouting at Leia trying to get her to point the huge cannon at the deck of the Jabba's flying junk, sail barge or whatever that thing was. So a distracted Jedi can get shot.

Absolutely. Throughout the EU, there are cases where Jedi are overwhelmed by blaster fire. Usually they are alone, and often attacked by many others. But the most notable event outside Order 66 was at the Battle of Geonosis:

Of the 212 Jedi who were part of the strike team, an unknown number fought in the arena. Only an estimated thirty of those survived the initial battle, of which at least one more died during the battle that followed, making the losses suffered by the team grave. All of the leaders of the strike force except Coleman Trebor survived, while some others were captured and others (Barriss Offee and Pablo-Jill) escaped the battle. Only the timely arrival of Jedi Master Yoda and the newly-created Grand Army of the Republic saved the strike team from impending destruction. Despite the high casualties suffered by the Jedi, their mission was successful, and Obi-Wan Kenobi, Anakin Skywalker, and Padmé Amidala were rescued from execution. (emphasis mine)

Also, as noted in the EU novel Labyrinth of Evil, which takes place immediately before Star Wars Episode III, droids were effective at killing Jedi:

As droids could not be sensed through the Force due to their inorganic nature, and could have their physical attributes extraordinarily augmented, they could be extremely effective Jedi hunters.

The Wookieepedia article on Jedi Hunters described beings and droids that were effective at killing Jedi.

Somewhat related to @Ssumner's answer: during the battle of Geonosis, Jango Fett killed a Jedi Master, Coleman Trebor, with a blaster: 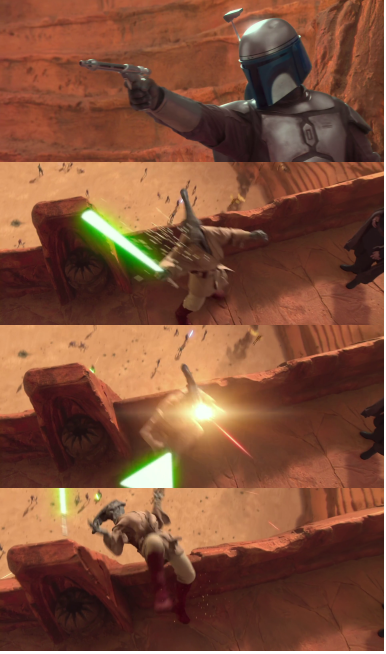 During the Siege of Ryloth, Jedi Master Ima-Gun Di, after fighting for several days and losing his entire unit, is gunned down by a hoard of battle droids shooting at him from all angles. This is a scene quite similar to the scenes of Order 66, which the exception that it's droids and not clones that are shooting at Master Di.

A "Force-sensitive" with a blaster can get trained to beat a Jedi. Let's not forget Knights of the Old Republic 2, where we discover that our pilot Atton is a former (VERY skilled) Jedi hunter.

A lightsaber can deflect a blaster shot, but only if it comes into contact with it. If the saber's blade doesn't hit the shot, then it can't do anything. Skilled swordsmen can defend themselves from multiple angles of fire with their saber by deflecting it all. However Jedi have been beaten by blaster bolts because they didn't deflect them. Having a lightsaber doesn't make you immune to blaster fire. However if a lightsaber comes into contact with a bolt it will render it useless-ish.

The lightsaber deflects the plasma from a blaster-shot rendering it useless. That combined with a Jedi/Sith's extensive training and ability to tap into the Force gives them the ability to block most shots even when under heavy fire. However, everyone makes mistakes every once in a while, and less experienced Jedi/Sith could be shot.

6
Why do people keep shooting at Jedi?

43
Why would a slug thrower be more effective against a lightsaber/Jedi than a blaster?
7
Why do Star Wars B2 Battle Droids only use one arm?
4
Are lightsaber blades a different material from blaster fire?
21
Why didn't the Jedi Council send a team of Jedi to go after General Grievous?
7
Why do Jedi practice lightsaber dueling, and not blaster fire deflection techniques?
65
Do lightsaber blades/blaster bolts cast shadows?
10
Why the Jedi or Darth Vader don't use the Force powers in space fights?
8
Why do the Jedi still teach forms for lightsaber combat?