Illusions within the Cthulhu Mythos

could anyone please advise me of any beings, within the Cthulhu Mythos, that use any form of illusionary spells. Specifically I'm trying to determine if any are known to use their magic, almost like a glamour, to lure or ensnare.

Nyarlathotep takes many different forms, both in Lovecraft's stories and in "Cthulhu Mythos" stories by other authors, see the table here. Not sure if he could be said to illusions to "ensnare", although in Lovecraft's original Nyarlathotep prose poem where the character first appeared, everyone seems strangely drawn to public exhibitions he would give, which seemed to involve mysterious hypnotic imagery as seen in the section below:

I remember when Nyarlathotep came to my city—the great, the old, the terrible city of unnumbered crimes. My friend had told me of him, and of the impelling fascination and allurement of his revelations, and I burned with eagerness to explore his uttermost mysteries. My friend said they were horrible and impressive beyond my most fevered imaginings; that what was thrown on a screen in the darkened room prophesied things none but Nyarlathotep dared prophesy, and that in the sputter of his sparks there was taken from men that which had never been taken before yet which shewed only in the eyes. And I heard it hinted abroad that those who knew Nyarlathotep looked on sights which others saw not.

It was in the hot autumn that I went through the night with the restless crowds to see Nyarlathotep; through the stifling night and up the endless stairs into the choking room. And shadowed on a screen, I saw hooded forms amidst ruins, and yellow evil faces peering from behind fallen monuments. And I saw the world battling against blackness; against the waves of destruction from ultimate space; whirling, churning; struggling around the dimming, cooling sun.

I think the "illusion magic" happens more in game adaptations than in the books themselves.

For example, in Cthulhu RPG, there was a spell called "Bait for humans":

Causes the image of a fabulously large and beautiful cut diamond to float in the air before the target. The spell costs the caster 1 magic point per casting, lasts for five minutes, and can be repeated indefinitely. Approximate range of the spell is one mile. As a target approaches the illusion, the diamond recedes at approximately the same speed, in the direction the caster wills, presumably to where the hungry cthonian waits. As in sport fishing, the target decides whether or not to take the bait. Only chthonians have this spell.

In Darkest Dungeon, there is the Siren: 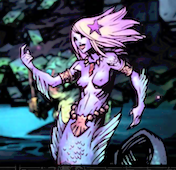 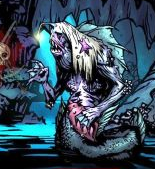 Not the answer you're looking for? Browse other questions tagged h-p-lovecraft cthulhu-mythos or ask your own question.