I'm trying to find a book about alien clanships

The book began with a human male accidentally being sold as a slave to a clanship of aliens. The aliens were much bigger and stronger than the human so ended up protecting him from their own kind. The human eventually was adopted by the clan. I believe it developed into a series and I read it more than 25 years ago. Thanks in advance.

Could it be Foreigner by C. J. Cherryh? It seems to tick quite a lot of the boxes with aliens being substantially larger than humans, using slavery and operating in clans. 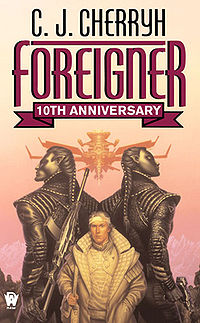 14
What Sci-Fi book (1987 or older) had Aliens conquer earth and made Humans their slaves?
18
Trying to find a sci-fi novel I read when I was a teenager (early 2000s)
5
Identify a book or series: Far future humans in clans/military groups named after game pieces fight against aliens
7
Book with blob-like non-humanoid alien that fuses with human
8
Earth destroyed, survivor grows up on alien world, later joins Earth military
8
Looking for a book about a guy who travels through portal in the Vietnamese jungle
10
Alien invasion with mythological undertones