Would the Elder Wand choose every new owner who wins?

We know that wands choose their owners, more so than the other way around. We also know that to master the Elder Wand, you need to win it, or defeat the current owner.

From the Harry Potter books so far, pretty much everyone who has defeated the previous owner has become the new master.

Could it have seen Voldemort as somehow not worthy or something?

It is possible that the Elder Wand might not choose the wizard who conquers it. If it is always the wand that chooses the wizard, any given wand might also not choose a wizard, even in the instance of a wand being won in a duel. Here, Harry is talking to Mr. Ollivander, the Wandmaker, about Draco Malfoy's want, which Harry took from Draco by force:

‘– then it may be yours. Of course, the manner of taking matters. Much also depends upon the wand itself. In general, however, where a wand has been won, its allegiance will change.’

There was silence in the room, except for the distant rushing of the sea.

‘The wand chooses the wizard,’ said Ollivander. ‘That much has always been clear to those of us who have studied wandlore.’

‘A person can still use a wand that hasn’t chosen them, though?’ asked Harry.

‘Oh yes, if you are any wizard at all you will be able to channel your magic through almost any instrument. The best results, however, must always come where there is the strongest affinity between wizard and wand. These connections are complex. An initial attraction, and then a mutual quest for experience, the wand learning from the wizard, the wizard from the wand.’

The sea gushed forwards and backwards; it was a mournful sound.

‘I took this wand from Draco Malfoy by force,’ said Harry. ‘Can I use it safely?’

‘I think so. Subtle laws govern wand ownership, but the conquered wand will usually bend its will to its new master.’

Mr. Ollivander says that a conquered wand -- which would presumably include the Elder Wand -- will "generally" and "usually" bend its will to the new owner, but he does not say a conquered wand will always do so.

I noted that you said, "wands choose their owners more so than the other way around." According to Ollivander, the wand chooses the wizard. Period. Can a wand's will be bent? Yes. But not always. And although a wizard can still use a wand that hasn't given its allegiance, the best magical results can only occur when the wand and wizard are on a mutual quest (see above).

Yes, the Elder Wand could not choose the new owner.

ETA: Tales of Beedle the Bard was niggling in the back of my mind after I answered this, so I checked The Tale of the Three Brothers and found something interesting about the Elder Wand:

Most witches and wizards prefer a wand that has “chosen” them to any kind of second-hand wand, precisely because the latter is likely to have learned habits from its previous owner that might not be compatible with the new user’s style of magic. The general practice of burying (or burning) the wand with its owner, once he or she has died, also tends to prevent any individual wand learning from too many masters.

Believers in the Elder Wand, however, hold that because of the way in which it has always passed allegiance between owners – the next master overcoming the first, usually by killing him – the Elder Wand has never been destroyed or buried, but has survived to accumulate wisdom, strength and power far beyond the ordinary.

So I'm sticking to my original answer of Yes, the Elder Wand could choose to not give its allegiance to a new owner.

The wand belongs to whomever conquers the wand's previous owner, regardless of the relative worth of that individual as a wizard. The key here is that merely taking possession of the wand (e.g. by trickery, theft or acquiring it after the death of the former owner as Voldemort did) isn't enough to transfer the wand's allegiance although it does allow you to use it as an "everyday" wand.

In canon there's no evidence that the wand has ever rejected a rightful conqueror but it has rejected several wizards who acquired it by other means; Voldemort and (possibly) Grindlewald.

"To truly own the Elder Wand, which means to receive the full benefits, double-edged though it is, of all its power, you have to have conquered the previous owner

When Harry wrestles Draco’s “everyday” wand out of his hand at the Malfoy’s mansion, he conquers Draco

There's an extensive history of the Elder wand here that should give you a lot more food for thought on the subject. 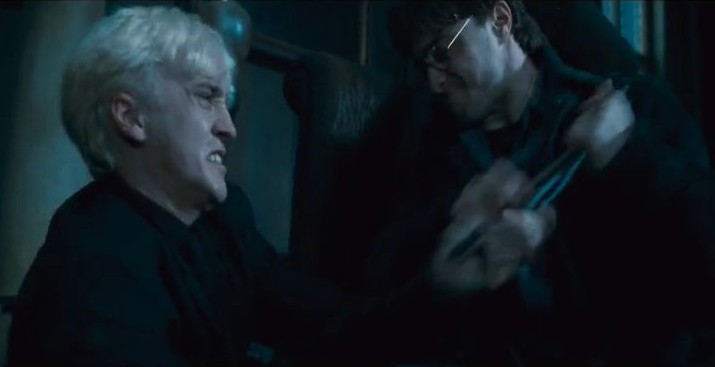 Not the answer you're looking for? Browse other questions tagged harry-potter wandlore deathly-hallows or ask your own question.

15
Can a Squib Own a Wand?
22
Do people normally own more than one wand?
19
How does a wand choose its new owner if the wand was created for the owner?
4
What would happen to the Elder Wand if a living Horcrux killed its current wielder?
8
Can the Elder Wand betray its owner?
1
Why was the Elder Wand not conflicted?
1
Voldemort using Lucius' wand; did he master it?